A tough moment for the young man. 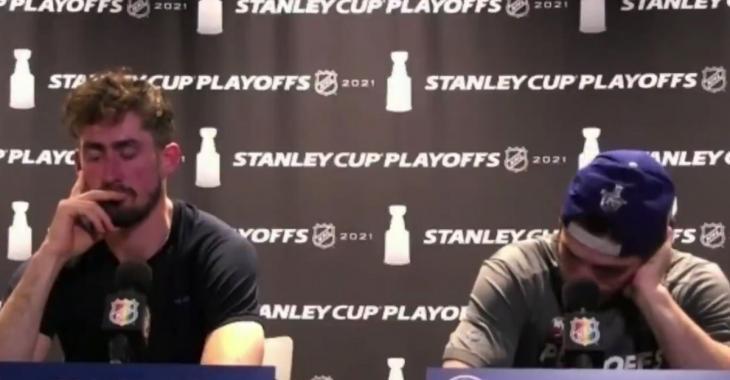 If you're a New York Islanders fan devastated at the thought of another Game 7 loss keeping you out of the Stanley Cup Finals this season, I suspect this short little clip of Islanders star forward Mathew Barzal might help you feel a little better.

The Islanders left it all out there during their 7 game war with the Tampa Bay Lightning in the Stanley Cup Semifinals and if there were any doubts about it the absolute state of Barzal following the loss instantly dispelled all of them. The Islanders star was a complete wreck following the game, so much so that he was unable to contain his emotions when fielding questions from the media during his post game press conference.

Barzal took to the podium with teammate Brock Nelson following the game but reporters, understandably, focused in on the Islanders' biggest name in Barzal. Although Barzal struggled through his first few answers, it was when he asked about his teammates that tears started flowing freely down his face. Barzal's emotion is so plain to see that I would go so far as to describe it as him openly crying on the microphone while specifically referencing teammates like Andy Greene and Josh Bailey, players that Barzal clearly feels may never get another shot at winning it all in their veteran National Hockey League careers.

"I think it's just for everyone you know?" said Barzal. "Sucks getting back to this point and coming up short again," added the Islanders star his voice full of emotion. "We've got guys like Bales and Greener, veteran guys that you know, I've got a few more years but... you wanna win for those guys and it hurts, it hurts seeing those guys in the locker room afterwards. That's how close we were."

Seeing how emotionally invested your organization's top star was in winning, not only for himself but for the love of those around him, certainly lets every fan know that the team put it all on the line to win. I suspect, given his level of ability, that Barzal will in fact get another shot to make a deep playoff run in his career, but it's also easy to see why he feels the way he does about certain players in the Islanders locker room.

Rumor: Connor McDavid gave the Oilers an ultimatum.
Subscibe to
Our NEWSLETTER
Receive the best articles of the web directly in your email