NHL News : Foligno explains why he fought Perry as he gets slammed for it

Is it a good enough explanation to his reaction? 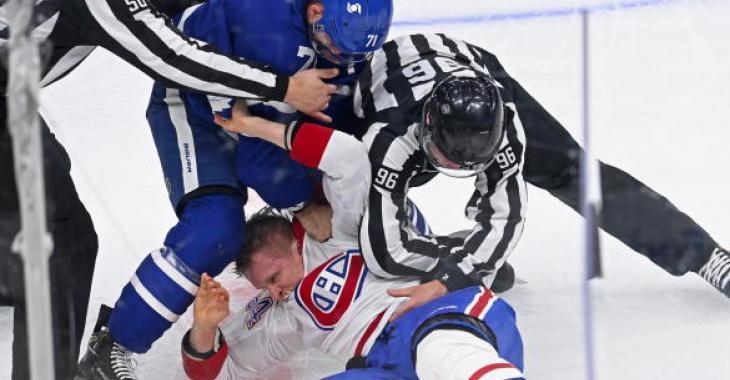 It was a scary scene in Toronto on Thursday night when Maple Leafs captain John Tavares was taken off the ice on a stretcher after a collision early in the first-round playoff matchup with the Montreal Canadiens.

It was a freak accident: Tavares bumped into Habs defenseman Ben Chariot, fell to the ice where he was defenseless and hit by forward Corey Perry’s knee.
Trainers and doctors from both teams rushed to the ice and attended to the veteran forward before he was taken away. The game was halted for several minutes. A game which the Canadiens won to take the 1-0 lead in the series.

Tavares’ teammate Nick Foligno felt like he had no other choice. Once the ice was clearly and players ready to get back to action with Tavares on his way to the hospital, the veteran forward dropped the gloves with Perry at the next face-off.

They talked a bit about it seeing that Perry knew it was an accident that unfortunately couldn’t be avoided. Even captain Shea Weber came in to talk to Foligno to get him to realize a fight was unnecessary. But the Leafs’ forward only saw it happen in real time and wanted to do this for his captain.

During the game, especially on social media, Foligno was heavily criticized for his decision to drop the gloves with Perry on a freak play.

Insiders, pundits and fans don’t agree with his call for a fight, which pushed Foligno to explain his actions after the loss:

“It was horrible. Life comes into play at that point and seeing how he was in pain, it made you sick to your stomach,” said Foligno.

Perry had a feeling that if he didn’t answer the fight now, it would come later on during the game, or even the series.

After the game, Perry was asked about what happened on the ice with Tavares and it was easy to tell it was a tough topic for the veteran forward. He attempted to explain how he tried to jump over Tavares, but couldn’t avoid him. Perry knew he couldn’t have done anything different, but appeared shaken up and choked up a few times with his answer.

Maple Leafs head coach Sheldon Keefe said after the loss that Tavares was conscious and communicating well. He added his tests had come back clear, though Tavares was to remain in hospital overnight.

No one expected this series to start off this way… no doubt.

Rumor: An update on Duncan Keith to Oilers trade
Subscibe to
Our NEWSLETTER
Receive the best articles of the web directly in your email