NHL News : Foligno and Perry drop the gloves after Tavares is stretchered off following accidental kick to the head from Perry

Not sure this settles the score? A freak accident like this has nothing to do with The Code. 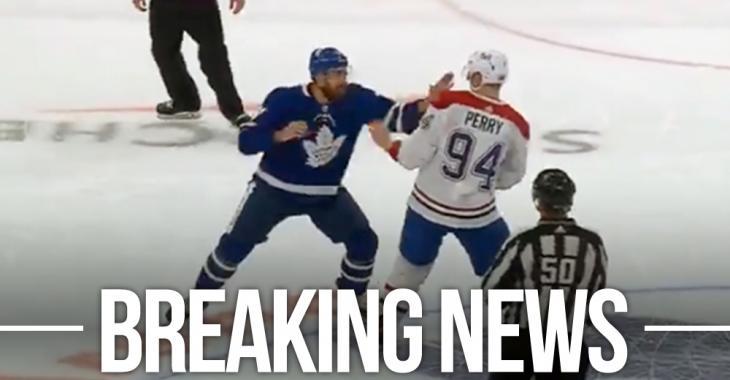 An ugly situation has transpired in Toronto during tonight's opening game of the Toronto Maple Leafs and Montreal Canadiens playoff series after Leafs captain John Tavares got clipped in the head by Corey Perry's skate.

Tavares lost the puck after taking a hit from Habs defenseman Ben Chiarot and did a bit of a barrel roll while trying to maintain possession of the puck. Perry comes in late and tries to jump over Tavares, but appears to hit him square in the face with his skate or his shin pad. Tavares was down and out before an official blew the play down and called for medical staff.

Tavares has now been stretchered off the ice and did manage to give a "thumbs up" signal while leaving the playing surface.

On the very next face off Leafs forward Nick Foligno dropped the gloves with Perry in some twisted form of retribution.

That feels like a bit of a hollow victory for Foligno, no? I understand why he felt like he needed to do something, but I don't blame Perry at all for what happened to Tavares. The fact is it was a freak accident and if it wasn't Perry himself involved, I don't think Foligno goes seeking revenge.

Atlanta Thrashers want to return for 2021 to help Canadian clubs!

After Drouin, another Habs player hints at mental health struggles
Subscibe to
Our NEWSLETTER
Receive the best articles of the web directly in your email