This was unbelievably stupid and dangerous! 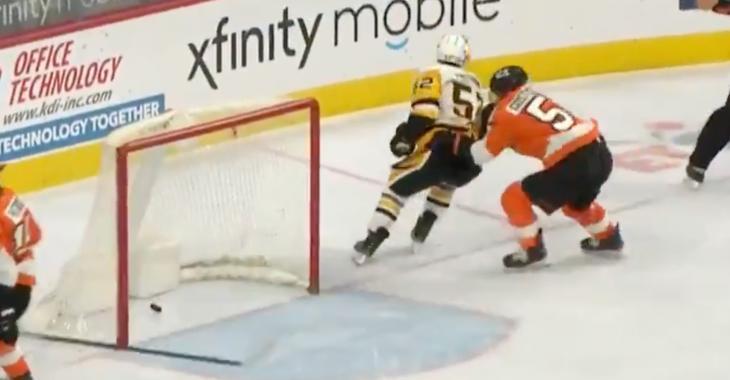 The Pittsburgh Penguins got their revenge on the Philadelphia Flyers on Tuesday, after a humiliating loss at their hands on Monday: they came out on top with a 7-3 over their ultimate rivals. But Flyers’ Shayne Gostisbehere was not thrilled with it.

Mark Friedman scored the last goal on the game in an empty net, but didn’t get a chance to celebrate. Gostisbehere pulled a very dangerous move as he cross-checked and pushed Friedman into the boards with frustration.

Friedman got up on his own and was able to join the scrum that ensued after the cheap play, but we all know he could have broken something and be out for a long time.

On Wednesday morning, the NHL Player Safety did not waste time to call out Gostisbehere, who will have a hearing for boarding Friedman in the last moments of last night’s game.

George Parros has been under fire since he simply punished Washington Capitals’ Tom Wilson with a $5000 fine for for punching New York Rangers forward Pavel Buchnevich in the back of the head while he was facedown on the ice, while also throwing star Artemi Panarin to the ice in the ensuing scrum. The Rangers posted a stunning statement later on Tuesday, demanding that the NHL fire the head of the NHL’s Department of Player Safety George Parros, who failed to suspend indefinitely a repeat offender like Wilson.

Let’s see how Parros reacts to this cheap move by Gostisbehere.

Rumour: Three-team trade needed to get Tarasenko out of St. Louis
Subscibe to
Our NEWSLETTER
Receive the best articles of the web directly in your email