Lehner, a former Blackhawks player himself, sells Fleury on The Windy City. 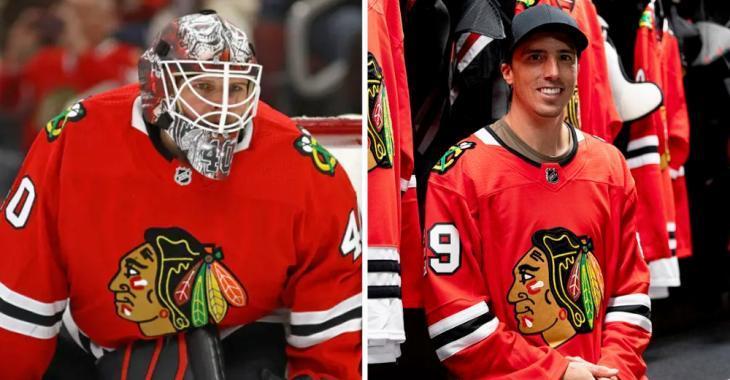 It's been over a week since the Vegas Golden Knights unceremoniously dumped franchise goaltender and Vezina Trophy winner Marc Andre Fleury to the Chicago Blackhawks for... well for nothing, really. The Golden Knights kicked Fleury and his $7 million cap hit out the door for almost no return.

The way in which the deal was done had drawn ire from not only Vegas fans, but from fans across the NHL. It was reported that Fleury had not heard from GM Kelly McCrimmon about his trade before it was leaked on Twitter from insiders like Elliotte Friedman and Darren Dreger. The team hadn't been in communication with Fleury and agent Alan Walsh in the days and weeks leading up to the trade and were reportedly just as stunned as fans were when the news went public.

Now a member of the Blackhawks Fleury is talking about that day and just exactly how he found out about his controversial trade.

Check it out courtesy of Blackhawks insider Mark Lazerus of The Athletic:

"My agent gave me a call, told me it was out on Twitter that I was traded. That’s how I found out. I don’t have social media, so I’m not on there looking things up all the time."

Fleury also opened up about what convinced him to join the Blackhawks. There were some reports in the days after his trade that he may in fact elect to retire, rather than join a new team. While Fleury admitted that he needed some time to make a decision, it had nothing to do with the Blackhawks or the city of Chicago, rather it just had to do with moving his family after committing to the city of Las Vegas to raise his children. But, a talk witih teammate Robin Lehner as well as friends Cam Ward, Chris Kunitz and Craig Adams (all former Blackhawks) convinced him to make the leap.

For what it's worth, I hope Fleury absolutely tears it up in Chicago. To me, the Golden Knights absolutely slapped Fleury in the face. There's been plenty of talk about how Fleury was the "face of the franchise" for the Golden Knights, but he was so much more than that. Every NHL expansion team since the 1990s has had a first "face of the franchise" but none of them have come even close to matching what Fleury brings to the table. Fleury is more than just a good guy in the locker room, he's one of the best goaltenders in the NHL and he's a three time Stanley Cup champion. He's arguably one of the best goaltenders of his generation and there's a real case for him to be inducted into the Hockey Hall of Fame when his career is over. Now the Golden Knights have tainted his legacy in the city and they've pissed off an entire fanbase in the process. Yikes.

NHL to get rid of emergency backup goalie policy?
Subscibe to
Our NEWSLETTER
Receive the best articles of the web directly in your email