NHL News : Fleury and Lehner share their thoughts on the goaltending controversy in Vegas.

What comes next in goal for Vegas? 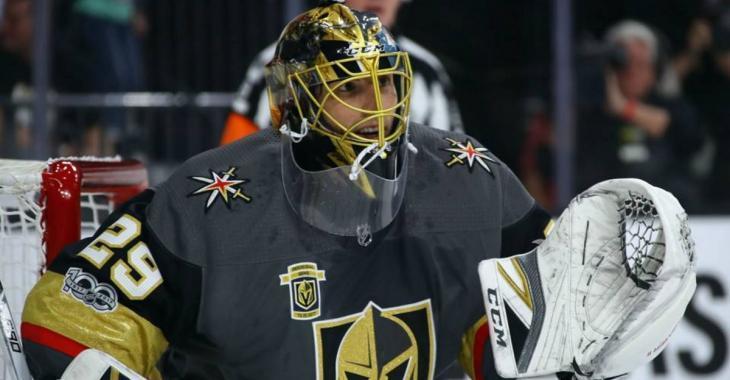 The Las Vegas Golden Knights have been eliminated from contention in the Stanley Cup Playoffs after losing in the semifinal to the Montreal Canadiens in just 6 games. The Golden Knights came into the series as heavy favorites and as a result there will be a ton of questions to answer in the offseason regarding what went wrong and why it went wrong.

One of the big questions that once again surrounds the Golden Knights this offseason will be what the future holds for the organization in terms of goaltending. Both Marc Andre Fleury and Robin Lehner remain under contract for the time being and that leaves the Golden Knights with a whopping $12 million of their cap space between the pipes. The fact that goaltending became a big topic for the Golden Knights in their recent series against the Canadiens certainly did not help matters, with many pointing the finger at Fleury's failures in the series as a key turning point while others have questioned the decision of head coach Peter DeBoer to bring in Robin Lehner.

Over the weekend both players were asked about the difficulties of playing alongside one another as teammates while also in theory competiting for the same job, but to their credit neither man seemed quick to complain. Lehner for his part said that he regarded Fleury as a legend of the sport.

“Flower’s as much of a legend to me as he is to you guys," said Lehner.

"I’ve played with some really good goaltenders in my career and playing with Marc-Andre is a privilege. We’ve grown a lot closer to each other and it’s been a pretty special couple of seasons here."

Fleury was asked if he could possibly envision ending his career in another market and he answered in the negative, seemingly having left the bad blood of the past in the rear view.

"I haven’t given much thought to the future but I hope I can stick around and finish my career here," said Fleury.

Fleury also confirmed that his daughters had sent Lehner some nice messages before he started in goal against the Canadiens.

Somewhat strangely even Fleury's agent Allan Walsh, the man who infamously published the photo of Fleury being stabbed in the back by a giant sword that had "DeBoer" engraved on it, got in on the love fest.

It would seem that everything is as good as it could be for now when it comes to the Golden Knights and their goaltending.