He remains the most disliked player in Canucks history. 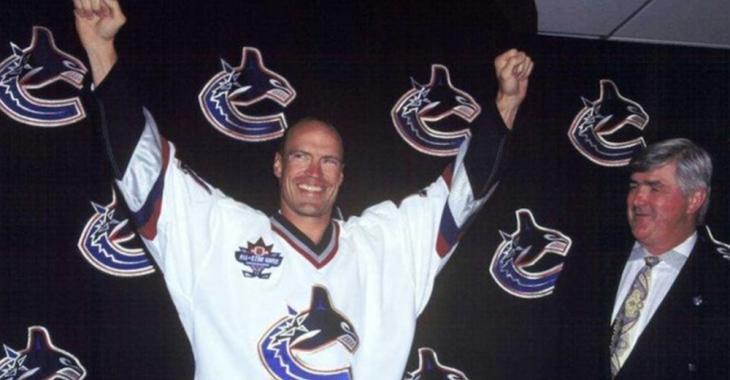 Six-time Stanley Cup champion and Hall of Famer Mark Messier is widely regarded as one of the great all-time NHL Players, and even has a leadership awarded named after him. To this day, he remains a beloved former member of the Edmonton Oilers and New York Rangers.

However, there's one team that he suited up for that would rather that era of their franchise be erased from history, and that would be none other than the Vancouver Canucks.

Messier departed the Rangers after the 1996-97 season and inked a multi-year with his former Canadian rival squad. But right from the get-go, it was a disaster waiting to happen - starting with what most fans felt was stealing the captaincy from the beloved Trevor Linden, who would be traded to the New York Islanders not long afterwards.

Not only this, but among the handwritten list of demands Messier included as part of bringing his services to the Pacific Northwest was wearing sweater No. 11, which had been unofficially retired by the team in honor of the late Wayne Maki, who had passed away due to brain cancer in 1974. The sight of Messier taking the ice wearing the jersey number understandably rubbed Maki's family the wrong way.

Oh, and there was also the demand for a phantom ownership stake in the club, which enabled him to take the Canucks to court two decades later.

The full list, which appears on the surface to look just like the notes that we all wrote back in high school, consisted of:

To say that things didn't work in Vancouver for Messier would be an understatement. His work ethic was called into question countless times, tallying only 162 points in 207 games played - well below his career average. In fact, former Cancuck Gino Odjick described the disastrous tenure in rather blunt terms:

"Messier was brought here to help lead us and put us over the top as a team and everybody was on board waiting to go along with him," he explained. "But right from the start it was clear he wanted to have all the power and wanted his own people around him."

"He didn't break a sweat for the first 10 games and just waited for Tom Renney and Pat Quinn to get fired. He talks to ownership all the time and he's responsible for Keenan being here and he's part of most of the trades. He sits in for four hours with management every time there's a trade. He (Messier) just wants to destroy everything so he gets the power. Everyone is brought in to play for Mark."

Messier certainly is one of the top players in hockey history, but his ill-fated tour with the Canucks didn't go as planned for either side.

Zdeno Chara gets huge boost ahead of game in Boston Wednesday!

It's true - Jonathan Quick is indeed going retro with his gear setup!
Subscibe to
Our NEWSLETTER
Receive the best articles of the web directly in your email