Take a look back as “Giggy” remembers a particularly grueling game in the 2003 Stanley Cup Playoffs. 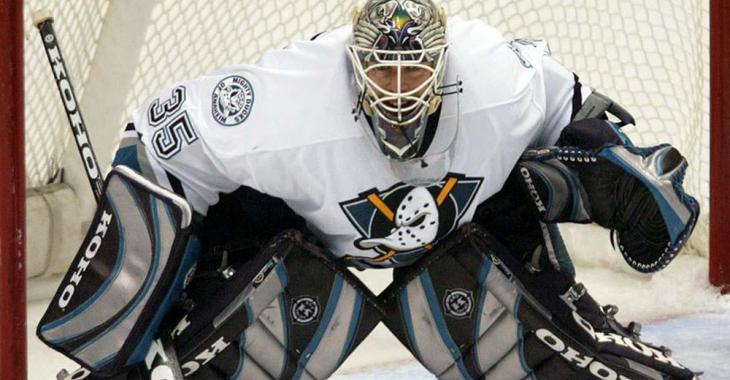 The 2003 Stanley Cup Playoffs saw some dramatic upsets and marathon games, but the entire annual tournament can seemingly be summed up in a single word - Giggy.

Of course, that's the nickname of goaltender Jean-Sebastien Giguere, who turned in nothing short of a super-human performance in the crease for the Mighty Ducks of Anaheim as they powered their on a Cinderella-esque run to the Stanley Cup Finals that would ultimately fall short in seven games to the New Jersey Devils.

Perhaps the most grueling game of the entire postseason that year (and in Giguere's career) was Game 1 of the Western Conference Semi-Finals against the Dallas Stars. Fresh off their stunning opening series win against the defendning Stanley Cup champion Detroit Red Wings, the Ducks aimed to pull off yet another upset, and they got the job done in six games.

However, the opening contest between the two squads was nearly three full game's worth of playing time. Petr Sykora's goal just under a minute into the 5th overtime period finally ended the marathon session, and Giguere explains that he didn't have much left in the tank by that point as he explained in a recent interview with The Athletic.

Due to a gastric condition that caused Giguere to become more dehydrated, team training staff took to keeping an IV hooked up to Giguere - during game play.

“It’s a line and you hook up the bag to it,” he said. “You see that at the hospital. But it takes a while to poke your vein and make sure to get the needle in and all that stuff. Instead of doing it every period, we just left it in. We just taped it on my arm. I would come in after the period and the bag would be ready. All you would have to do is connect the bag to the line. That’s how it was. We’d pour a bag in and it was very refreshing.

“You can feel it going through your veins. With the bag and ice packs, it really cools you off. In Dallas, the rink was so warm there. All I needed was a bit of relief from that.”

So, what is life like for a goaltender as a game carries on into several overtime periods?

“The shots are not as hard to stop,” Giguere said. “The guys are just kind of throwing everything at the net, trying to create something. But there’s no traffic. There’s a lot less traffic at the net.

“You can tell guys are exhausted. Truthfully, for a goalie, the more the overtimes went the easier the game was. If you were able to manage your fatigue and your hydration and stuff like that, the game itself wasn’t that hard because the guys didn’t have any energy left.”