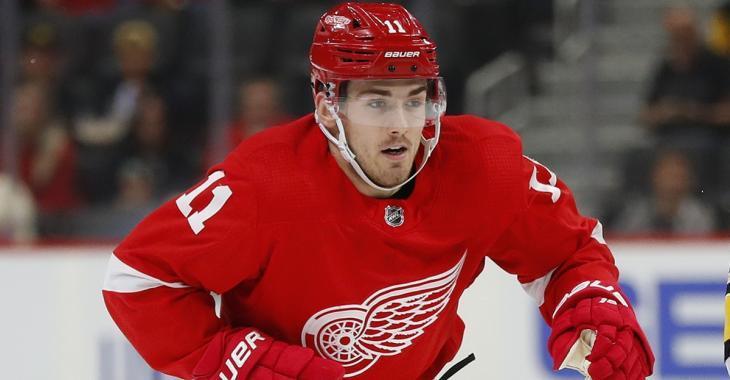 I think we can safely say that Detroit Red Wings first round pick Filip Zadina is not a big fan of the Vancouver Canucks' Conor Garland.

The two men faced one another on Saturday night during a game contested between the Red Wings and Canucks, one the Wings would eventually take by a score of 3 - 1. It was during the third period of the game however that Zadina and Garland butted heads.

It was roughly midway through the third when both Garland and Zadina found themselves in a race towards a loose puck behind the Vancouver net, a race that ended with Zadina looking up at the bright lights hanging from the rafters. As the two men raced for the puck, Zadina put himself in a very vulnerable position by reaching for the puck with his stick, a position that Garland took full advantage of by exploding through Zadina with a "reverse hit."

In spite of the fact that Garland is of relatively small stature by the standards of the National Hockey League, the hit was enough to rock Zadina and send him back to the Red Wings locker room. Here's the hit at real speed, as well as the slow motion replay:

It was after the game however that the fireworks really began. In spite of the fact that his fellow Red Wings' teammates gave Garland a hard time following the hit, Zadina was clearly very unhappy about it when speaking to the media following the game. Zadina unloaded on Garland, even going so far as to refer to the Canucks forward as a "midget" a word I suspect the NHL and the Red Wings would have prefered he didn't use.

Zadina then proceeded to suggest that Garland had delivered the hit because he was afraid of battling him in the corner.

"I'm ok. I just chased the puck and was reaching for the puck and he just reverse hit me I guess. Like the midget that he is it's pretty normal that he reverse hits, because I don't think he's strong enough to battle me in the corner one on one."

There was no joking or mirth in Zadina's words on Saturday night and the Red Wings forward is clearly not happy about this hit. It will be interesting to see the dynamic between these two play out the next time they face one another.

Anton Khudobin made a healthy scratch for disciplinary reasons.
Subscibe to
Our NEWSLETTER
Receive the best articles of the web directly in your email