NHL News : FIGHT NIGHT in NYC between the Bruins and Rangers! 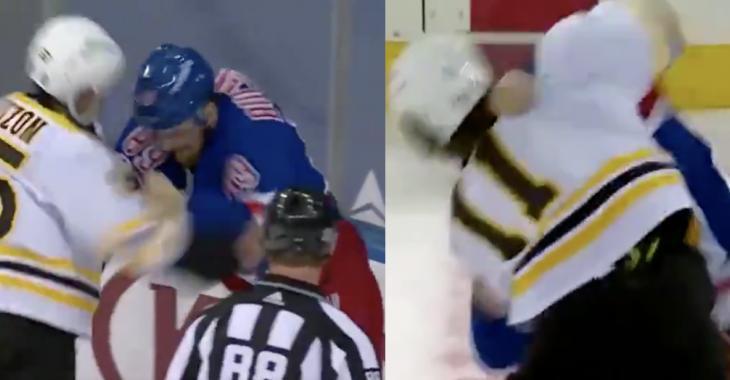 There is no doubt this is a very good game and the intensity is one of the main players in this Boston Bruins vs. New York Rangers showdown on Friday.

During the second period, two heavyweight fights took place. The first one saw Bruins’ Trent Frederic dropping the gloves with Rangers’ Brendan Lemieux. While both fighters offered a good show, Frederic ate quite a few punches and wanted revenge!

As he skated towards the penalty box, he was caught saying: “We’re going again.”

That hasn’t happened yet, though another fight took place moments later. This time it was Bruins’ Jeremy Lauzon who exchanged blows with Rangers’ Pavel Buchnevich.

They had no mercy during the fight. Both get five for fighting. Lauzon also got a 10-minute misconduct. The Bruins player reportedly got the misconduct for punching Pavel Buchnevich while he laid on the ice.