NHL News : Fight breaks out in stands as Avs’ fans have gear stolen during Knights’ celebrations

Watch out Habs fans, don’t show up to Vegas with a Canadiens’s flag… 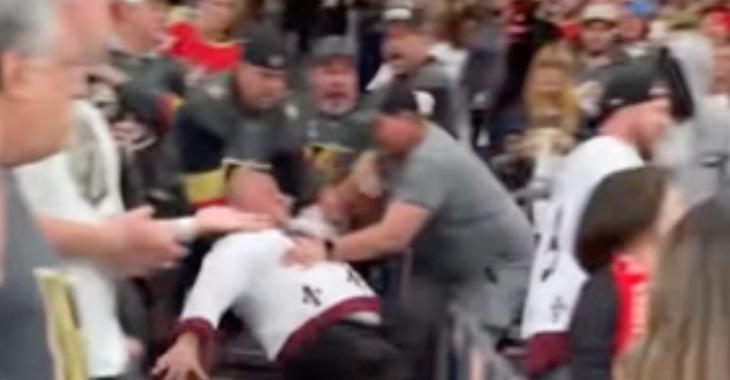 The Vegas Golden Knights were excited to advance to the third round after beating the Colorado Avalanche at home in six games to get closer to the Stanley Cup on Thursday night. Fans were excited as well, however, some took it a little too far when one member of the audience stole an Avalanche flag held by two fans that cheered for Colorado.

They noticed right away that their flag was getting stolen and one of them went up the stands to get it back. As he looked for it, there was some pushing and shoving and things went out of control.

A fight broke out as the other Avs fan managed to recuperate the flag, but many other Vegas fans continued to add fuel to the fire by screaming at the other Colorado man who had 3-4 Knights fans on him.

The fight was eventually broken up, however, security members were never on the scene to get things under control. Clearly, what happens in Vegas stays in Vegas - only it starts trending like this footage.

We can appreciate that fans love their hometown team and are thrilled to see them moving on to face the Montreal Canadiens in the semi finals, however, respect should never be too far away.

Check out how it all went down in the video here below: