NHL News : Fans come for Ron MacLean after he chickens out in interview with Gary Bettman 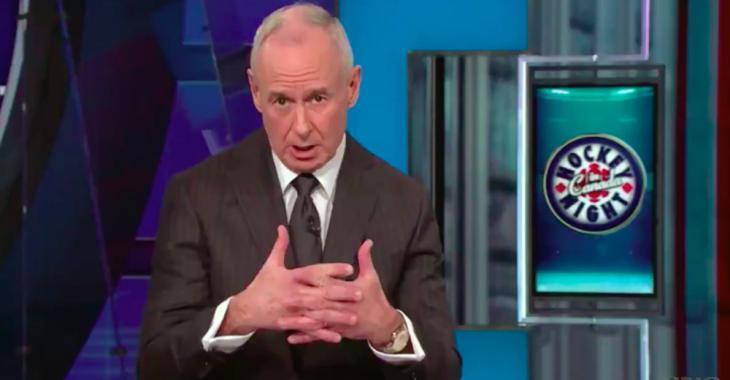 In case you missed it yesterday evening, longtime Hockey Night in Canada host Ron MacLean interviewed NHL commissioner Gary Bettman on CBC as is tradition in the Stanley Cup Final. MacLean, who used to be known for holding the commissioner's feet to the fire, served up softball after softball to Bettman this time around though and hockey fans on both sides of the border are calling him out for not questioning Bettman on the ongoing investigation of the Chicago Blackhawks.

The Blackhawks, of course, are under a third party investigation for their alleged involvement in aiding and abetting convicted sexual predator Brad Aldrich. The NHL thus far has declined to comment on the matter other than to say that the league would wait for the results of the investigation before commenting. To many hockey fans that's a pure copout and in the past MacLean would be the first guy to call that out. Not now it seems though...

Check out the fan reaction online to MacLean's decision to go soft:

I've got to say... while I'm not usually one to pile on, I think I'm going to side with the criticism of MacLean here. This entire situation has the potential to be the biggest scandal in NHL history and MacLean doesn't even mention it? That's either a gross oversight or a purposeful oversight. Neither is a good excuse.

Frankly, I'm growing tired of watching and listening to the "Ron MacLean Apology Hour" every Saturday on Hockey Night in Canada these days. It seems like MacLean has to apologize every week for either something he said, something he didn't say or something he insinuated. It's getting to be a bit much. I think that with MacLean's foil Don Cherry now out of the picture that MacLean simply can't carry a show on his own. The fact of the matter is that he and Grapes had such a fantastic dynamic for decades and now I think that MacLean is struggling to stay relevant in a rapidly changing media landscape. David Amber and Elliotte Friedman seem to have a good working chemistry and I would have no problem with Amber taking over hosting duties for Hockey Night in 2021-22.