I honestly think there's something to this and the NHL should investigate. Thoughts? 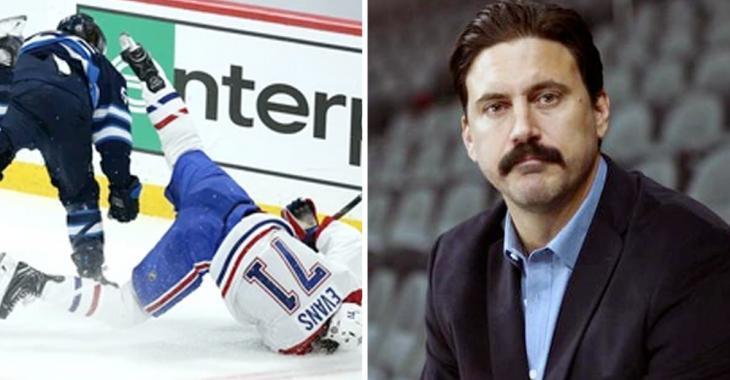 And in case you missed it last night, Evans effectively iced the game late in the third period with an empty netter, but before he could celebrate the goal he got absolutely TRUCKED Scheifele.

In his ruling Parros states that Scheifele was clearly not trying to make a play on the puck to prevent a goal, but rather that his intent was to deliver a devastating hit to a prone individual. While I agree with that sentiment, frankly I'm a bit shocked at the severity of the suspension. To me, Evans carries a bit of responsibility for this as well. There's no denying the fact that Scheifele came from too far away (charging) and clearly took advantage of a player in a vulnerable position. There's also no denying the fact that Evans put himself in that position. He has his head down, he has no awareness of Scheifele's positioning and he is 100% eligible to get ROCKED by putting himself in that position. Now... is he eligible to get blown up from 15 feet away? No, that's why there was a penalty on the play and that's also why NHL Player Safety has doled out supplemental discipline.

Honestly, it's also frustrating to see the inconsistencies from Parros and the DPS this season. Scheifele, a guy with no supplemental discipline history and who has played a clean game for over 500 career NHL games, gets a 4 game suspension for a hockey play, while guys like Ryan Reaves and Tom Wilson get off nearly scot free for plays that have nothing to do with hockey. It's these sort of inconsistencies that have led a lot of fans online to call out Parros for his clear conflict of interest. After all, Parros was a member of the Canadiens during his playing days. I'm not saying that that factored into his decision making, but it's an obvious conflict of interest, no?

It's worth noting that the last time a player was suspended at least 4 games for charging was Cody Eakin (Dec. 15, 2016) and it was for a hit that he delivered on a goalie, Henrik Lundqvist. So what gives, Parros?