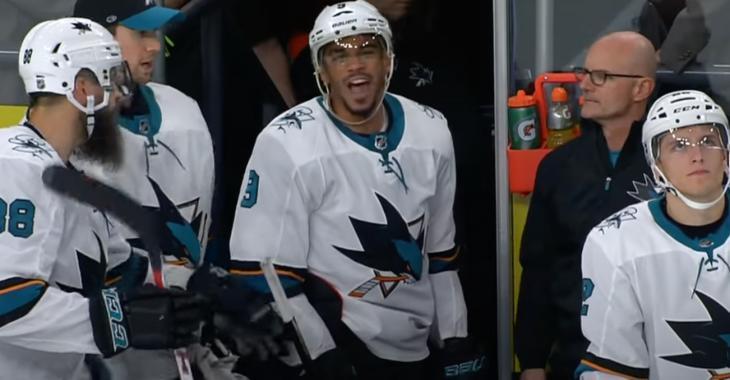 At the start of January, before the 2021 season got underway, San Jose Sharks forward Evander Kane was sued by Centennial Bank for unpaid premiums on an $8.3 million loan. As a result, the Sharks forward has had his $7 million annual salary garnished by Centennial Bank. Per the complaint, the Sharks were contractually obligated to pay the bank back directly from Kane’s wages. However, Centennial says they stopped receiving direct deposits from the team in October 2019. In addition, Kane allegedly defaulted on the loan by missing a December 2019 payment and has made no payments since. Kane reportedly filed for bankruptcy claiming that he is n$26.8 million in debt.

This crazy story took another shocking turn this week as The Athletic reports that Kane filed a petition claiming his creditors’ attempts to convert his case violated the 13th Amendment to the U.S. Constitution’s prohibition against involuntary servitude.

Here is how it is broken down in the article on The Athletic:

“Five lenders, including Zions Bancorp., are seeking to convert Kane’s case under the bankruptcy code from Chapter 7, which would only force him to pay creditors using current assets, to Chapter 11, which would place the remaining years of his Sharks contract under their control and allow them to garnish his wages.

“Zions makes it clear in its Motion that the sole reason it seeks conversion to Chapter 11 and appointment of a Chapter 11 trustee is to ensure that Kane’s future income is property of the bankruptcy estate, for whatever period of years the Chapter 11 trustee and creditors deem appropriate for a bankruptcy plan,” Kane’s motion said.

While Kane, who is Black, conceded that “some may consider involuntary servitude to be an extreme description of the Debtor’s potential fate,” his motion highlighted recent bankruptcy cases that made the same comparison.”

On top of this, Kane “claims that his lenders are incorrect about the amount due to him under this contract, pointing out that while his latest check was gross $213,905, after escrow, deferral, payroll deductions and other deductions, it fell 82 percent to $38,709.”

From the beginning of this saga, it was revealed that Kane had gambling issues : in November 2019, the Cosmopolitan of Las Vegas sued the athlete to recover $500,000 in unpaid casino markers. The Cosmopolitan dropped the case last April, presumably because the debt was settled, but we wonder now with what money.

On his gambling issues, Kane believes they have used to paint him as someone unable to deal with his financial affairs.

“With respect to my gambling, it has been an issue in my past and it would be inaccurate to pretend it has not had a negative effect on my life, financially and otherwise,” he wrote in his declaration. “I have undergone and continue to receive personal therapy to deal with it and other matters and hope that the issue is behind me.”

This is not close to being over…

Trade Alert: Sens ship Wolanin to Kings in one for one swap