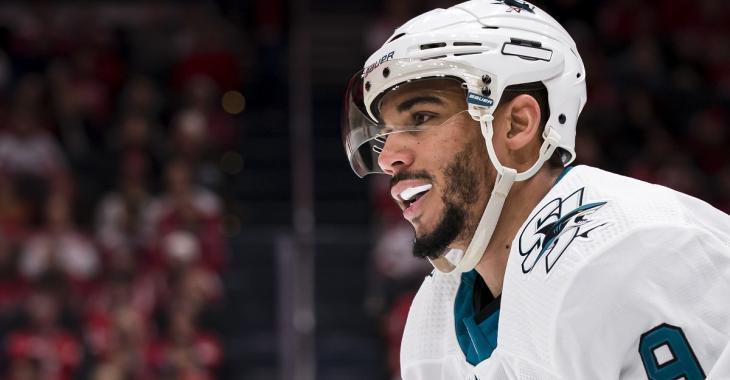 This Evander Kane story is going to get much uglier before it is all said and done.

For those of you who missed the absolute bombshell that dropped over the weekend, Evander Kane's wife, Anna Kane, went full scorched earth on Saturday when she published a number of extremely serious accusations online against her own husband. Anna, who Evander now alleges is his estranged wife, publicly accused Evander Kane of fixing games in the National Hockey League for the bookies he has allegedly been gambling with on those very same games.

This speaks directly to the competitive integrity of the sport and as a result you knew that it would not be long before the NHL itself became directly involved in the matter. They have since done just that and honestly it felt like only a matter of minutes between the time the accusations were made public and the the time the NHL issued a strong response on this matter. Both the league itself and the San Jose Sharks, the team that currently employs Evander, made it clear that there will be a full investigation into this matter.

Now for the first time since the accusations were made public we are hearing from the accused himself, with Evander releasing a pair of scathing statements of his own on Sunday morning. Evander claims that he is doing so despite contrary advice from his lawyers, which frankly sounds like a terrible idea given his already substantial legal troubles, and in the first statement he appears to completely disown his wife and the mother of his child.

Here it is unedited and in full:

Unfortunately I would like to address the completely FALSE accusations that my estranged wife and soon to be ex wife has made against me. Even against the advice of my legal team I feel strongly that the public and fans hear this directly from me. I have NEVER gambled/bet on Hockey, NEVER gambled/bet on a Sharks game, NEVER gambled/bet on any of my games and NEVER thrown a hockey game. The facts are I personally had my best season of my career last year and was the most consistent I’ve been throughout any season, I’m proud of that. I love the game of Hockey and would never do any of what was alleged. I look forward to cooperating fully with the league’s investigation, having my name cleared and looking forwards to this upcoming season.

In a second statement, Kane addresses the accusations that he had been an absentee father and has failed to provide for his daughter both emotionally and financially.

Here is that statement unedited and in full:

With recent allegations that my ex wife chose to make public, I want to clearly respond as follows.

I love my daughter. I will and always have taken care of my daughter in every way possible. I have always made sure her mother has had everything she’s needed and more. I have tried to de-escalate our divorce issues and be as civil and calm as anyone in this position could. I have tried to set up FaceTime calls and visits with her. I have had some FaceTime calls but not every day as I would like to because of being restricted by her mom. She has refused me to see her and has unfortunately tried to use my daughter as leverage. I will continue to always take care of my family that goes without question. I would encourage people to realize that someone who goes to this length to try and jeopardize someone’s career with lies is mentally unwell. I hope this is the last time I will be publicly addressing any further misrepresentations of me as a father.

Evander is of course innocent until proven guilty but I can tell you quite frankly that fans are not giving him the benefit of the doubt on this matter. Evander's name has already been dragged through the mud in the court system by angry creditors looking for repayment on Evander's massive debts that he accumulated through what is primarily believed to be as the result of a terrible gambling addiction, and he has a history of questionable behavior during his years in the NHL which no doubt are playing a big role in how the public is perceiving this latest debacle he finds himself tangled up in.

Penguins provide troublesome update on Kapanen days ahead of season