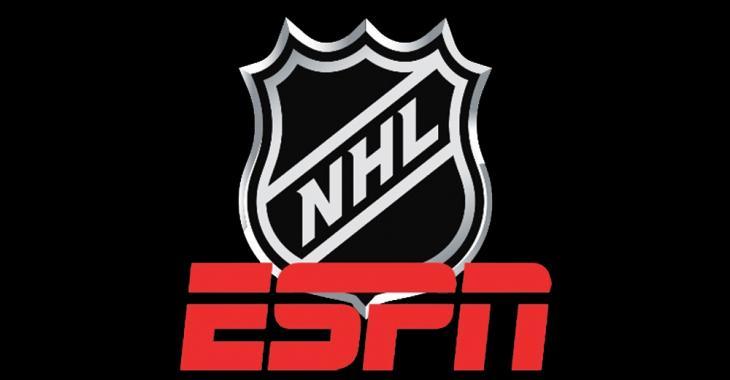 This just in, the NHL and ESPN have announced a seven year, $2.8 billion dollar deal that will see NHL games broadcast on multiple cable outlets, streaming platforms and will include Stanley Cup Final games on ABC.

The deal, which is believed to be worth $416 million per season covers roughly half of the NHL's U.S. broadcasting and streaming rights, meaning that league could come to another agreement with an ESPN/ABC competitor like NBC or Fox. It's worth noting that the NHL's current deal with NBC Sports pays them $200 million per season for 100% exclusive broadcasting rights.

Suffice it to say that the NHL's new deal with ESPN is a whopping win for Gary Bettman and NHL team owners.

More on the deal, from NHL.com:

It is highlighted by: exclusive coverage of the Stanley Cup Final on ABC in four of the seven years of the agreement, with the ability to simulcast/megacast on ESPN+ and additional ESPN networks; the return of live NHL action to ESPN networks with 25 exclusive national regular-season games on ABC or ESPN; 75 national regular-season games per season produced by ESPN that will stream exclusively on both ESPN+ and Hulu; half of the Stanley Cup Playoffs on ABC and ESPN each season; and coverage annually of NHL's Face-off (opening night games), the NHL All-Star Game and Skills Challenge, plus other NHL special events each season.

Additionally, the NHL's out-of-market streaming package, with more than 1,000 games (formerly on NHL.TV), will now be available for fans to stream only as part of an ESPN+ subscription.

The agreement also includes extensive highlight rights that will add to coverage across ESPN's year-round news and highlights programming, and to coverage on the ESPN App and social media. International media rights - including in Latin America, the Caribbean and parts of Europe - are also part of the agreement.

This is certain to make NHL franchises skyrocket in value during a time when the business has been hit harder than every. Full credit to NHL commissioner Gary Bettman on this one. While a large portion of NHL owners wanted to shutter the 2020-21 season to save money, Bettman pushed on knowing that he'd be in a better position to broker a multi-billion dollar broadcasting deal by remaining open. He gambled and he won BIG time. Kudos, Mr. Bettman.

Report: Another player issue forced Rutherford out of Penguins’ office
Subscibe to
Our NEWSLETTER
Receive the best articles of the web directly in your email