This was a tough press conference on the veteran forward. 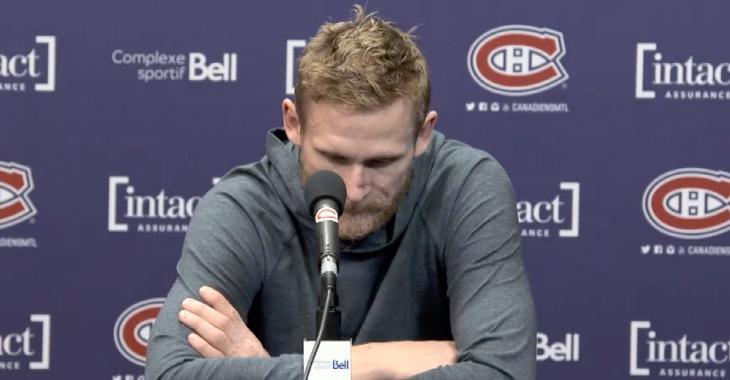 This was the final day for the Montreal Canadiens to get together, clean out the dressing room and met with media members to recap this eventful 2021 season.

A couple of days after losing the Stanley Cup to the Lightning in Game 5 at Tampa Bay, Habs players faced tough questions ahead of the upcoming campaign, knowing that the roster is likely to change.

A change could affect veteran forward Corey Perry, who signed just one year back in December 2020 with the Canadiens. He is set to become an unrestricted free agent, and despite his age (36), Perry wants to keep playing. He said it all in a very emotional press conference.

Furthermore, he wants to keep playing in Montreal. And he said it with tears in his eyes.

“Yes, I intend to play hockey next year. There’s still a lot of good hockey left in me, and I would love to come back to experience Montreal for what it’s like really being in Montreal.”

While most questions asked focused on his playing future and the amazing journey the Habs were on this season, one reporter asked Perry, a veteran in the league who won the Stanley Cup with the Anaheim Ducks in 2007, what he took of Nikita Kucherov’s comments after he hoisted the trophy on Wednesday night.

If, like Perry, who have no clue what Kucherov said, he he called out fans in Montreal for being too excited after the Habs managed to win Game 4.

Perry had no clue what was said by Kuch, and scoffed when it was explained to him: “he was drunk and shirtless.” The Habs’ veteran didn’t want nothing to do with the question or Kucherov.

“I have no idea what he said.”

Throughout the entire press conference, Perry was quite emotional and holding back tears, saying that he talked with GM Marc Bergevin looking to return to Montreal for the upcoming season.

It was easy to see how important it was for Perry. And he’s been trending since seeing that fans want him back in Montreal too!

Jaromir Jagr scores his first goal of the season!
Subscibe to
Our NEWSLETTER
Receive the best articles of the web directly in your email