NHL News : Eddie Olczyk gets emotional in his final NHL on NBC signoff

We love you, Eddie! 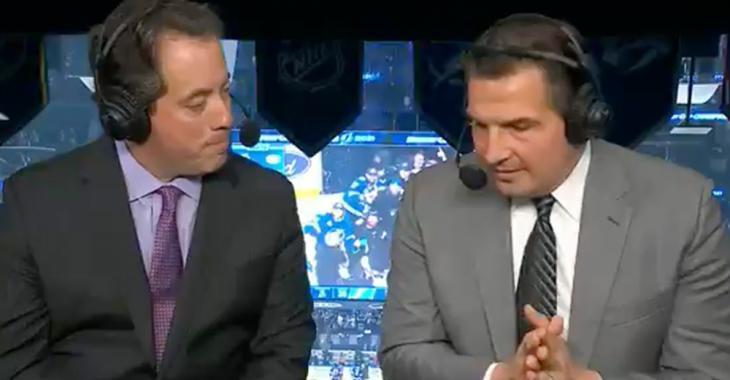 With last night's Stanley Cup victory by the Tampa Bay Lightning to close out the 2020-21 season, longtime NHL broadcaster NBC is officially done with the league. New American rights holders ESPN and TNT take over broadcasts next season and in fact ESPN will make its NHL re-debut with the 2021 NHL Expansion Draft later this month.

All of this is to say RIP to the NHL on NBC.

While NBC may not have exactly delivered on its promise to take the NHL to the next level over the past decade, there were still some incredibly memorable moments broadcasted on NBC and there were some extremely talented people on both sides of the camera during NBC's run.

I mean... try not to get chills watching this send off from now retired NBC broadcast Doc Emrick last night:

What was even better tho was Eddie Olcyzk getting emotional in thanking the entire NBC staff who supported him when he fought Stage 3 colon cancer two years ago.

You're one of the all-time best, Eddie. Thanks for the memories.

Look, I'm not the biggest NBC fan in the world and I've been openly critical of the broadcasting giant's coverage of the NHL over the past decade but I can also appreciate all the good they've done for the game from 2011 -2021. Doc and Eddie were always a delight to listen to and I actually came to enjoy a lot of the intermission analysis that NBC served up, especially when they pivoted away from Jeremy Roenick and Mike Milbury in recent years. I'm excited to see what ESPN and TNT serve up for us over the course of this new agreement, but I think both broadcasters can learn from NBC's successes and failures.

It's hard to remember but there was a time where the NHL was virtually invisible in the United States for the general public. Prior to the NHL and NBC's 10 year, $2 billion contract in 2011, the NHL was broadcasted on places like the Outdoor Life Network and Versus. Um... what? Exactly. While NBC may not be the first broadcaster you think of when you think of professional sports, they did so much more with the game than the likes of OLN and Versus. Again, it's only fair to give credit where credit is due. Here's hoping ESPN and TNT can pick up the ball (puck?) and make even more good things happen.

Matthew Barnaby under fire for comments on yesterday's events at the U.S. Capitol