Ejected in the preseason. 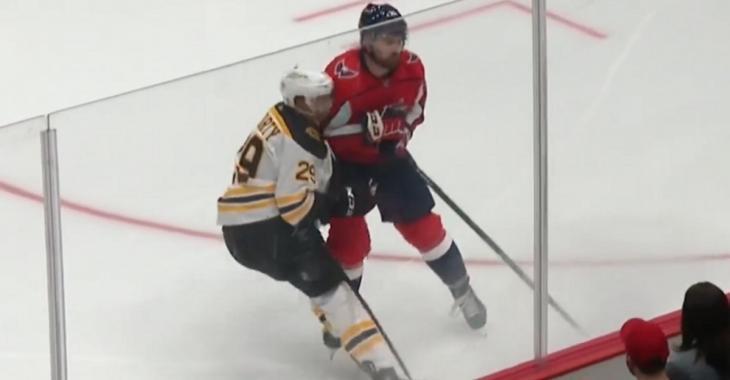 Washington Capitals forward Dylan McIlrath may very well have earned himself the first suspension of the National Hockey League preseason.

On Sunday night during a preseason content between the Capitals and the Boston Bruins, McIlrath delivered a blatant head shot to Steven Fogarty. The hit came within the opening seconds of the game's third period when McIlrath attempted to overcompensate on a failed hit and instead ended up catching his vulnerable opponent up high.

McIlrath was looking to play the body in a race for the puck but it was Fogarty who got there first and it looked like he would be able to avoid the contact as well. As Fogarty played the puck he quickly lurched backwards in order to avoid the incoming hit from McIlrath and although he did enough to avoid the incoming body contact, he was unable to get his head out of the way of a streaking McIlrath.

There may be some mitigating factors here for McIlrath, for example Fogarty's attempt to avoid the contact did change the angle of the hit, but there's little doubt that he should have given up on the hit when the head became the only possible point of contact. The fact that he received a game misconduct here could potentially be enough to avoid a suspension, but with the way the NHL has cracked down on head shots in recent years I would not be surprised if he were to get a call from the league's Department of Player Safety.

Any discipline that may be forthcoming won't be much consolation to Steve Fogarty however. The Bruins defenseman was left down on the ice for several long moments as he attempted to shake off the hit, and unsurprisingly he was taken to the locker room by the Bruins training staff following the blow to the head. At the time of this writing Fogarty has not returned to the ice and given the NHL's rules surrounding concussions and the league's concussion protocol it seems very unlikely he will return in the third.

We will seek to bring you an update on his status following the conclusion of the game, assuming that head coach Bruce Cassidy is able to provide one when he addresses the media.

Carey Price may be exposed in the expansion draft.
Subscibe to
Our NEWSLETTER
Receive the best articles of the web directly in your email