NHL News : Dylan Larkin says the Red Wings are done being pushed around. 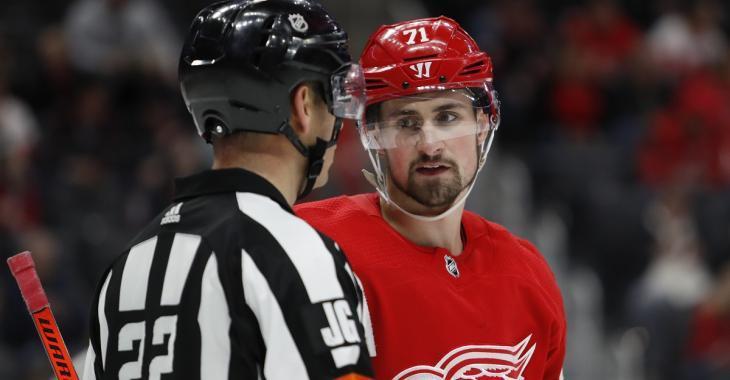 The Detroit Red Wings have had enough.

If you needed any indication that the Detroit Red Wings were not just going to sit by and let themselves be pushed around by the other teams in the National Hockey League, then you need look no further than the Red Wings season opener against the defending Stanley Cup Champions the Tampa Bay Lightning.

It was during that game that Red Wings captain Dylan Larkin earned himself a one game suspension for a punch that he threw at Lightning forward Mathieu Joseph. The punch was a response to a very dangerous hit that Joseph had delivered to Larkin, one that was especially dangerous for the Red Wings captain.

Roughly midway through the second period of the Red Wings opener, Joseph drove Larkin head first into the boards. It was an ugly hit regardless of the circumstances, but it was even more difficult to watch for those who are familiar with Larkin's injury history. Larkin is coming fresh off a serious neck injury and I don't think a single fan in the world blames him for reacting the way he did.

Larkin would miss the Red Wings practice on Friday as a result of the hit, but on Monday he returned to the ice with his teammates. Following that practice Larkin was asked about the incident and the Red Wings captain had several interesting comments on the situation. The first of these comments was Larkin making it clear that the Red Wings would no longer be a whipping boy for the rest of the league's teams.

Interestingly enough Larkin also indicated that he agreed with the suspension from the National Hockey League's Department of Player Safety, stating that the punch had come as a result of anger he still felt from his previous neck injury. In that scenario Dallas Stars captain Jamie Benn went unpunished for injuring Larkin.

Last but not least Larkin also shared some information that might actually make some fans think differently about Mathieu Joseph. In spite of the fact that Larkin had taken a swing at him in retaliation, the Lightning forward still made the effort to reach out to Larkin following the game and apologized for the hit.