Safe to say that Leafs Nation is a little on edge these days. 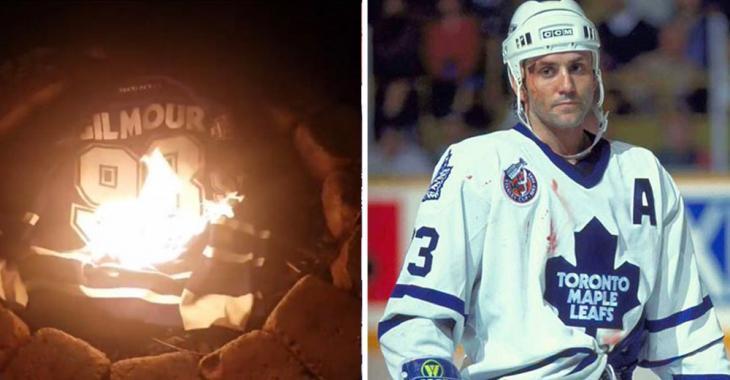 In case you hadn't noticed, Toronto Maple Leafs fans are a little angry these days...

After the Leafs were bounced from the 1st round of the Stanley Cup Playoffs by arch rival Montreal Canadiens earlier this week, fans from Leafs Nation have been taking to social media to voice their displeasure. But one fan has taken things to far in the eyes of Leafs legend Doug Gilmour.

Gilmour, affectionately known as 'Killer' by Leafs fans, took to Twitter earlier today to share his thoughts after a fan posted a video of himself burning his Gilmour jersey in effigy.

I've got to say... I'm kind of conflicted on this one.

On the one hand, this fan is an absolute donkey. What does Gilmour even have to do with the Leafs? He hasn't played for the team in decades now, so I'm not sure what kind of point you're making by burning his jersey? Should Red Wings fans be lighting their Gordie Howe jerseys on fire? Should Buffalo Sabres fans burn their Gilbert Perrault jerseys? Should New Jersey Devils fans burn their Scott Stevens or Martin Brodeur jerseys? You get the point. It's absolute nonsense.

On the other hand, everyone has a right to be a donkey. There's no law against being an idiot and this guy is a shining example of that. I assume this guy paid for this jersey with his own money and because of that he's free to do whatever he wants with it. The fact that this is what he decided to with his jersey and his free time tells me everything I need to know about him. But again... he has a right to be a donkey.

Personally, I'd have put my jersey on eBay or, as Gilmour himself suggests, I would have donated it to a homeless shelter or other good cause. But to each their own. Anyone talking about the sanctity of the Leafs logo or burning the jersey as some sort of sacrilege though needs to get a grip. It's a hockey jersey, not a historical monument. Unlcutch your pearls, people...