Detroit Red Wings GM Steve Yzerman could have it in his head to bring back veteran goalie Jonathan Bernier. 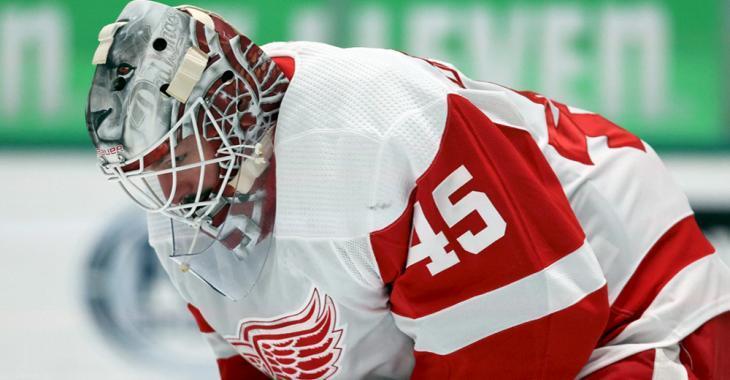 Detroit Red Wings goaltender Jonathan Bernier turned in a superhuman performance last night against the Dallas Stars, making a whopping 50 saves and doing everything within his power to give his team a chance to win.

Unfortunately, his teammates didn't exactly return the favor, managing only six shots through the first two periods and ultimately ending up with just 17 on the night. And to make things worse, it was an untimely turnover by defenseman Filip Hronek early in overtime that opened the door for Stars captain Jamie Benn to tally the game-winning goal just 32 seconds into the extra frame.

The good news is that Bernier's performance was the latest example of a bright spot in an otherwise rather dreary last few years of Red Wings hockey. Since signing a 3-year contract with Detroit in the summer of 2018, Bernier has turned in, for the most part, consistently solid games. And to his credit, that may give Red Wings GM Steve Yzerman something to think about this summer.

Bernier is slated to become an unrestricted free agent at the conclusion of the NHL season, and if the words of noted former goaltender and current NHL Network analyst Kevin Weekes are any indication, Bernier's tour in the Motor City may not be coming to an end.

Prior to the NHL Trade Deadline, Weekes noted that the Red Wings "may have some appetite to re-signing Bernier” during the offseason. Of course, Bernier's name was listed as one of the possibilities that Yzerman could flip to a contending team in need of goaltending help at the deadline in exchange for future draft capital, of which he's already secured plenty as he works on rebuilding the franchise.

However, no deal emerged, and for now, Bernier remains in Detroit.

Fellow goalie Thomas Greiss, whom Yzerman signed to a two year contract last offseason, hasn't exactly set the world on fire with his performance in net this season, amassing only six wins in the 28 games that he's manned the crease.

While there will be plenty of options for Yzerman to choose from should be ultimately not offer a new deal to Bernier this season, don't be surprised for No. 45 to be wearing the Winged Wheel beyond this season.