The latest on the injured rookie. 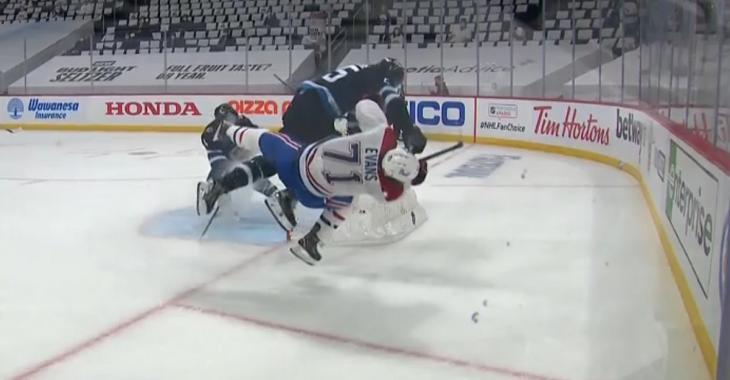 The Montreal Canadiens lost rookie forward Jake Evans to injury in Game 1 of their second round series against the Winnipeg Jets in this year's Stanley Cup Playoffs and to say that Evans was injured under controversial circumstances would be a bit of an understatement.

Evans was of course injured when he was the victim of a hit from Winnipeg Jets veteran forward Mark Scheifele, a hit that saw Scheifele charge down the ice with a full head of steam before absolutely leveling Evans who was in the process of scoring an empty net goal that would put the game away for the Canadiens. If you missed it, here's the replay:

On Sunday just prior to the third meeting between these two teams, Canadiens head coach Dominique Ducharme was asked to provide an update on the injured Evans and we are happy to report that thus far things seem to be trending in a positive direction for the young forward.

The kind of injury that Ducharme is referring to here is no doubt a concussion and as the Canadiens head coach correctly points out it becomes very difficult to establish a timeline for recovery in these situations given just how much it can vary from player to player. Based on the tone of his comments on Sunday however it does not sound like he expects to see Evans back in this series any time soon, which may mean that the Jets could have Scheifele back in the lineup prior to Evans returning should they force some additional games in this series.

Schiefele was of course on the receiving end of a 4 game suspension as a result of the hit that he delivered to Evans, a punishment that he felt was somewhat excessive given his clean history as a player in the National Hockey League. He will serve the second game of that suspension tonight when the Jets and Canadiens face off in Game 3.

You can check out Ducharme's full comments from today's media availability below.

Three trade deadline targets for the Toronto Maple Leafs.
Subscibe to
Our NEWSLETTER
Receive the best articles of the web directly in your email