Dubnyk is not playing around. 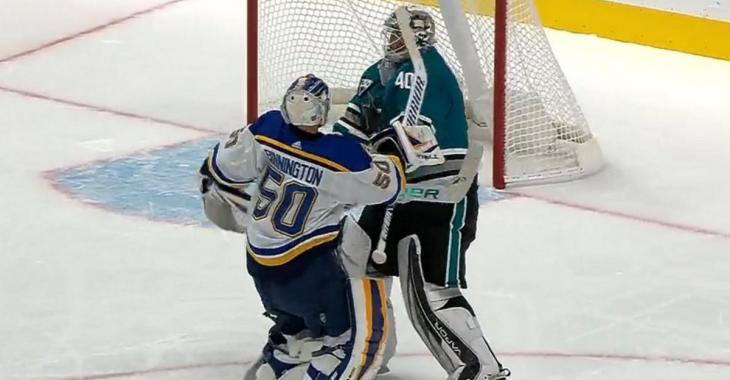 In case you didn't have a good reason to tune in to the next clash between the San Jose Sharks and the St. Louis Blues, which by the way will be on March 8th, Blues goaltender Jordan Binnington made sure on Saturday night that the date will be can't miss TV.

On Saturday night Binnington and the Blues were facing off against the aforementioned Sharks, and I think it is safe to say that Blues head coach Craig Berube did not like what he saw from his Stanley Cup winning goaltender. Although this was a high scoring game on both ends of the ice, with the final tally resulting in a whopping 13 combined goals, Berube was quick to the pull the trigger on a goalie swap, taking Binnington out of the net roughly midway through the second period.

It was this decision to pull Binnington from the net that would lead to the controversy, although through no fault of Berube's. After getting the signal that his night had come to an early end, Binnington would proceed to skate down the ice and act in a rather inappropriate fashion towards several members of the Sharks roster. By the time Binnington had skated down the ice from his net he had been involved in 3 different altercations with 3 different Sharks players, including defenseman Erik Karlsson and goaltender Devan Dubnyk.

We still don't know what provoked this reaction from Binnington, but on the broadcast there was some speculation that it could have been taunting from members of the Sharks bench.

Things didn't really get too physical until Binnington confronted Dubnyk however, but even then the physicality lasted but for a split second before Binnington realized that the big man in the Sharks net was not playing around. The much smaller Binnington quickly changed his mind and skated off the ice, something that Dubnyk himself was quick to call out after the game.

"I don't know why he's skating around, pretending to punch guys," said Dubnyk. "I told him to get off the ice, he's 165 pounds, swinging at guys, fake punching guys."

It's hard to call this anything other than a punk move on the part of Binnington, and I think it's safe to say based on Dubnyk's trash talk here that he feels the same way. Dubnyk is known for being a nice guy off the ice, but I suspect that his blood will be hot the next time these two teams face off against one another.

Lehkonen leaves the game after dangerous hit from Sergachev