Detroit's top overall draft selection of 2019 is gunning for a spot in the lineup. 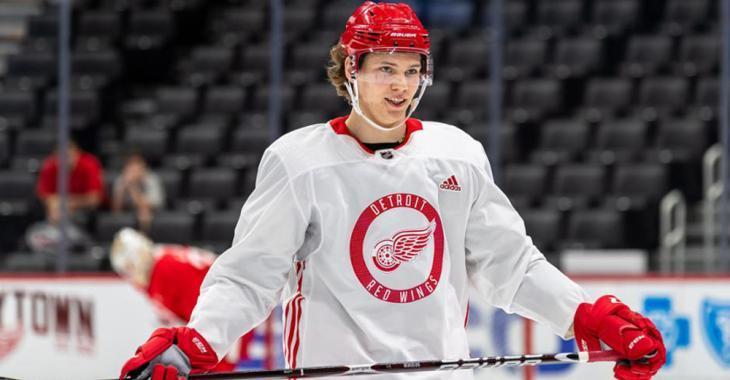 Detroit Red Wings general manager Steve Yzerman apparently knew what he was doing when he made his first draft pick since taking the reins in the Motor City when he decided to make German defenseman Moritz Seider the franchise's selection at No. 6 in 2019.

And so far, Seider is not only looking every bit as advertised, but is causing visions of having a bonafide top defenseman patrolling the blue line in Detroit to dance around in the heads of fans.

He enjoyed a productive first season in North America last year, tallying two goals and 22 points in 49 games for the AHL's Grand Rapids Griffins. He's been on loan with Rögle BK of the Swedish Hockey League, and was recently named the recipient of the SHL Elite Prospect's Award after tallying seven goals, 21 assists and a plus-14 rating in 41 games played, along with another goal and four assists in 13 playoff games.

He's now at Training Camp with the Red Wings, and is expected to earn a spot in the lineup. He's been paired with veteran defenseman Nick Leddy, whom Detroit acquired during the offseason. And it's been the ideal coupling, as the veteran Leddy is able to pass along wisdom to his young understudy.

"I think (Leddy) can bring some of that wisdom not just to Seider but to other guys on our team," Red Wings coach Jeff Blashill said. "They've introduced some young defensemen there over the last couple of years in New York and I think Leds has seen those guys develop, so I think he can impart some of that wisdom to Seids as well. ... That's the pairing we had today and we'll see what tomorrow brings but we think it was potentially a good pairing."

"He's big, he's smart, he's got confidence, he's got some toughness to him. He can play in a lot of situations. So I think he's got that opportunity to be a really good player, we're gonna give him the opportunity to do that and then he can grab it by the horn."

This Boston Garden table hockey arena is incredible!
Subscibe to
Our NEWSLETTER
Receive the best articles of the web directly in your email