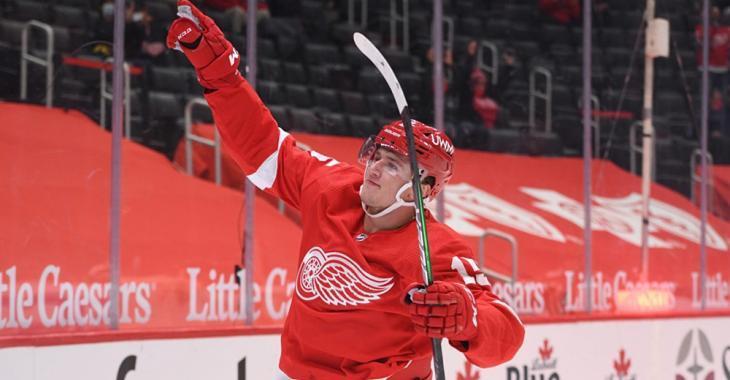 The Detroit Red Wings pulled off one of the NHL Trade Deadline's biggest moves last month, acquiring forwards Jakub Vrana and Richard Panik along with a 1st and 2nd round draft pick in exchange for underachieving forward Anthony Mantha.

And though it was a small sample size, Vrana and the Red Wings appear to be a match made in heaven.

Vrana scored eight goals (four in one game against the Dallas Stars) and three assists in the 11 games he appeared in with his new club, and showed that he can be the kind of impactful player that helped the Capitals to their first Stanley Cup in franchise history in 2018.

“He’s the type of player we can use here, a guy who finishes and just has that offensive ability,” defenseman Danny DeKeyser said. “He wants to put the puck in the back of the net.

“He’s real good. … He’s got high-end skill, that’s obvious. When he gets the puck in the offensive zone, he creates chances and he’s one of those guys that when he gets a Grade-A scoring chance or a breakaway, he buries those more often than not.”

“What I really liked were two unreal backchecks,” said head coach Jeff Blashill after a recent game. “That’s the work ethic of someone who wants to become that complete player, and hopefully complete winner, that you need.

“It’s not like he’s without mistakes. He’s going to continue to grow in those areas. But to me it shows what his care level is.”

For Blashill, he also values the work ethic that Vrana displayed upon his arrival in the Motor City.

“We’ve had a number of meetings already, we’ve gone over some things, and he’s done a real good job of being receptive,” Blashill said. “He truly wants feedback and he wants to get better at things.

"He's a really talented player, and that’s a fact. He needs to keep working on his all-around game, but he’s a really talented player. He can be a real key addition, and what I like most about him is he’s been very receptive to coaching. He wants to get better in those areas that he needs to get better at so he can be out there more, and he’s done a good job of that.

Alex Galchenyuk, Paul Byron, headline a busy day on waivers.
Subscibe to
Our NEWSLETTER
Receive the best articles of the web directly in your email