NHL News : David Ayres makes an appearance for the Hurricanes in Game 1. 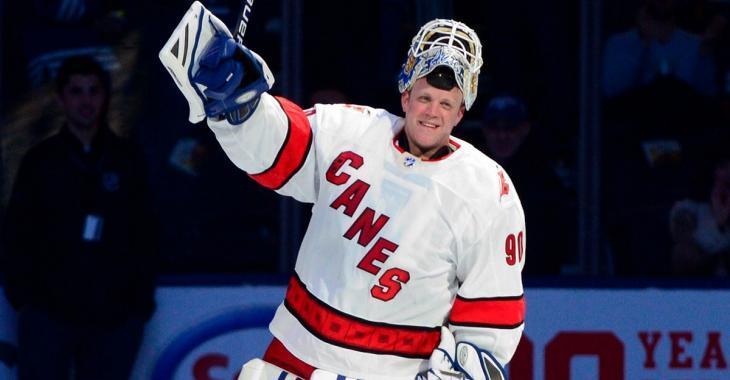 The story of emergency backup goalie David Ayres captured the hearts of fans all across the hockey world but there is probably no fan base in the hockey community that has more love for Ayres than the one that belongs to the Carolina Hurricanes.

On February 22nd of 2020, hard to believe that it was that long ago, Ayres made a highly unexpected appearance for the Hurricanes after they lost both goaltenders Petr Mrazek and James Reimer to injury during a regular season game against the Toronto Maple Leafs at Scotiabank Arena. At the time Ayres was 42 years old and was only on hand as an emergency backup goalie, a role that is very rarely used in the National Hockey League. That appearance resulted in him setting an NHL record given that he became the oldest goaltender to ever win his regular season debut, a record that is very unlikely to ever be broken.

Ayres, who was born in Whitby,Ontario, had grown up as a fan of the Maple Leafs and although it was likely his dream to play for the Leafs franchise growing up he will now forever be remembered as the Emergency Backup Goalie that defeated the Leafs. Something that haters of the Maple Leafs will likely never let them forget.

Well on Sunday night the Hurricanes decided to commemorate that rather magical moment when they welcomed Ayres back to the NHL for the first time in quite a while, having the goalie that is now a part of their history crank the siren during Game 1 of their second round series against the Tampa Bay Lightning.

Although he only ever played in that single game for the Hurricanes, and a road game at that, he received a warm reception from the crowd that was on hand at PNC Arena on Sunday night. Ayres also seemed very enthusiastic when turning the crank, so much so that I thought at some point he might just tear the handle right off, and seemed especially happy with his performance after it was all said and done.

A great moment and a great tribute to a guy who played a huge role in creating a very memorable moment in both Hurricanes franchise and NHL history.

Flyers rocked by multiple injuries, lose Morgan Frost long-term
Subscibe to
Our NEWSLETTER
Receive the best articles of the web directly in your email