This isn't the first time that McCarty has gone after Babcock. 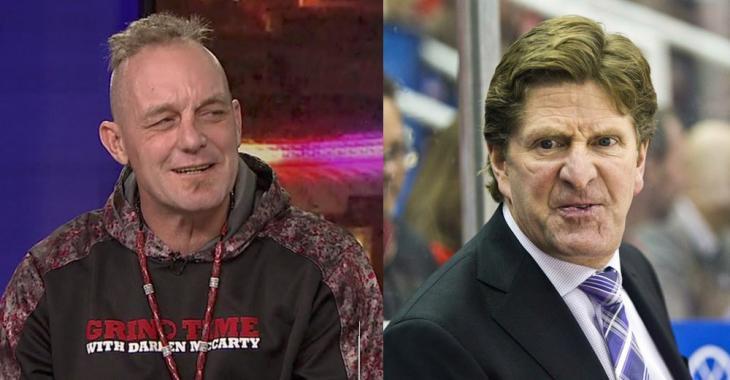 Former Detroit Red Wings forward Darren McCarty was one of many players who came out and had less than flattering things to say about head coach Mike Babcock, going so far as to say that the coach cost Detroit a second straight Stanley Cup win due to coaching decisions.

And now, McCarty is at it again, stating that he's got no room in his life for a person like Babcock.

While speaking on The Word on Woodward podcast, McCarty reacted harshly to when the subject of Mike Modano being scratched by Babcock and preventing him from playing in his 1,500th career game during the 2010-11 regular season, stating that he'd love to let loose and describe how he really felt about that incident but had to hold himself back.

"Doesn't it reveal himself of what we found out about said Babcock?" McCarty opined. "There's too many good people in the game to have a guy like that, because if you don't think that was intentional, you don't intentionally not do that."

"I'm in a dichotomy, because like I said, I respect Mike Babcock because my final game in the regular season at Joe Louis arena, he starts the Grind Line. He didn't have to do that, but did when I came back in 2008. So he has that in him to recognize history. Its just like personal things that are bigger than the game."

"There's a bunch of stuff that happened when I wasn't there, but that right there tells you. There's no room for a person like that in anything that I do."

As previously stated, this isn't the first time that McCarty had verbal wrath for the former bench boss. He stated two years ago that Babcock misused star forwards Pavel Datsyuk and Henrik Zetterberg by running them "into the ground to prove his point", and that the Red Wings triumphed in 2008 "in spite" of Babcock, not because of him.

One of the most successful head coaches of the modern NHL era, Babcock guided the upstart Mighty Ducks of Anaheim to within one game of the 2003 Stanley Cup championship. Following his hiring by the Red Wings in 2005, he proceeded to win a total of 458 games in the Motor City that included four straight 50-win seasons, the 2008 Stanley Cup falling one win short of a repeat in 2009.

He chose to move on from Detroit in 2015 after 10 years, accepting a contract from the Toronto Maple Leafs that made him the highest-paid bench boss in the sport.

However, after his dismissal by Toronto in November of 2019, his career came under scrutiny after several reports from former (and current) players painted Babcock in a negative regarding his treatment of them and coaching style.

One particular scathing testimonial came from former Red Wings forward Johan Franzen, who called Babcock the “worst person I’ve ever met” and said the coach caused him to suffer a nervous breakdown.

Things get worse for Max Domi under John Tortorella in Columbus

New enticing offer on the table for Taylor Hall!
Subscibe to
Our NEWSLETTER
Receive the best articles of the web directly in your email