A sad day for many currentand former players. 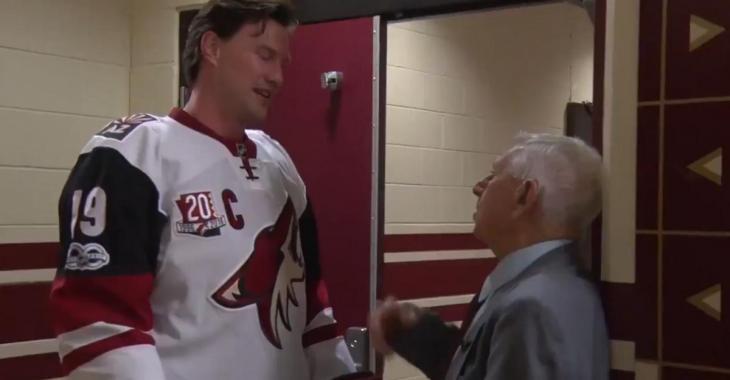 The Arizona Coyotes lost a long time member of their organization this past week when long time parking attendant Lou Monaco sadly passed away.

Although Lou will not be a household name among NHL fans, he was a beloved figure within the Coyotes organization and as the parking lot attendant for the players, he was one that had a rather uniquely close relationship to many of the players that were a part of that organization over the years.

First to give you a better idea of who Lou was as a person and what he represented to so many of the players, here is a short clip produced the Coyotes that paints a great picture of the man. My favorite part here is where he, unprompted, expresses just how much he loves the game of hockey and the people who are involved in it.

Long time member of the Coyotes organization and current goaltender for the Calgary Flames Louis Domingue expressed his sadness at the passing of Lou, adding that the man's positivity is something he will carry with him forever.

Another former Coyote in Max Domi also offered his condolences.

These are current players however and Lou's time with the team literally spans decades of Coyotes players. If you're wondering how a parking attendant could have become close to so many players, it was as a result of his 21 year tenure with the team from 1996 to 2017.

Former Coyote Jeremy Roenick also bid his farewells, calling Lou one of his favorite parts of playing for the Coyotes.

Hurricanes forward Jordan Martinook, who also spent several seasons with the Coyotes, also offered some kind words. Much like in the case of Loui Domingue it seems as though the big takeaway from Martinook was in regards to just how positive Lou always was during his time with the Coyotes.

Although I never got the chance to know Lou personally it would appear that by all accounts he was a uniquely kind soul and no doubt the world is a little less bright now that he is no longer a part of it. I would like to take this moment to offer my condolences to Lou's family, his loved ones, and anyone that has been impacted by his passing.

Marchand and Zibanejad get in epic standoff, end it in rock-paper-scissors showdown!
Subscibe to
Our NEWSLETTER
Receive the best articles of the web directly in your email