NHL News : Crosby under fire after NBA-style flop against the Bruins.

Not a good look for Crosby. 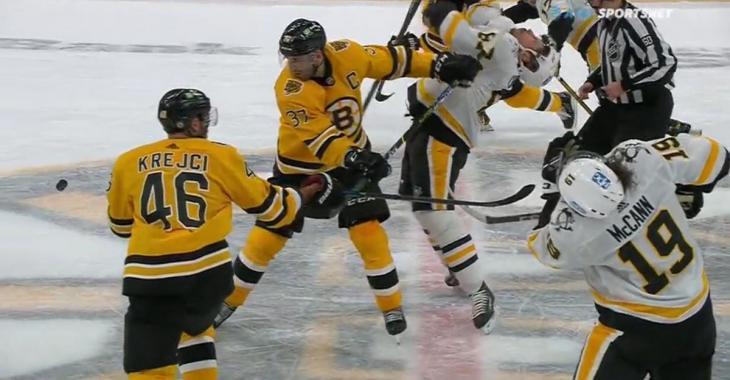 Pittsburgh Penguins captain Sidney Crosby probably could not have picked a worse moment in which to do this.

In a week in which Crosby was criticized by one of his former peers for some of the less palatable behavior he has displayed during his career in the National Hockey League, the Penguins captain decided to do his best to sell a call late in the game against the Boston Bruins on Saturday and now fans are letting him hear about it.

For those of you who missed the incident, Crosby drew a penalty late in the game's third period when he used what can only be described as an NBA-style flop to draw a penalty against Bruins captain Patrice Bergeron. The two men were head to head during a faceoff at center ice when Crosby was clipped by the butt end of Bergeron's stick, potentially striking him in the mouth in the process. Now anyone who has been hit with the butt end of a stick, especially when the stick and your face are both ice cold, can tell you how much it hurts, but despite that the sell on this call from Crosby was extremely dramatic.

What made this so much worse was that Bergeron was given a double minor, during a power play for the Bruins, in spite of the fact that no call had initially been made on the play. Fans from all around the league have been quick to rip him for this behavior, with several fans comparing his antics to what you would see in soccer.

One fan made a rather hilarious comparison to the legendary Ric Flair.

You get the idea. Now this in and of itself would be a bad look for Crosby, but it looks even worse in the context of what Crosby was dealing with this week. During the week former NHL forward and longtime rival of Crosby's Brandon Dubinsky was asked about the rivalry between Crosby and Washington Capitals star forward Alex Ovechkin, when he made comments that were very critical of the Penguins star.

"Everybody wants to talk about Sid and Ovi or whatever," began Dubinsky before adding. "F****, Sid. I’ll take Ovi every day of the week."

Dubinsky would double down on his comments when they garnered a ton of public attention, pointing to some of the behavior early in Crosby's career that earned the Penguins star a ton of haters.

"Listen. Crosby is better then me I never said he wasn’t," wrote Dubinsky. "He’s obviously one of the best ever. It was Ovi vs Sid. None of you played in the NHL and know how hard it is to score goals in the NHL. 724 is insane. Sid just whined way too much and Ovi just shut up and played hard."

Things like this flop today are certainly not going to do anything to dispel that notion from Dubinsky's mind or the minds of others who think like he does.

The worst part about this though? If you go back and watch the replay carefully, you can see poor Jared McCann take quite the shot to the face from a high stick courtesy of David Krejci, one that goes entirely unnoticed.

Here is a second angle of both incidents:

Update: I have had a few commenters ask me why I called this an NBA-style flop, here is my answer: