That is one fine looking jersey. 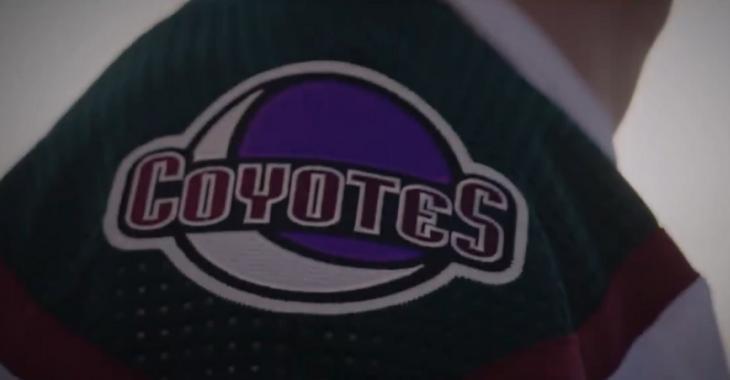 The Arizona Coyotes have outdone themselves this time, and I suspect that their new owners are going to be very happy with the sales that this new item is going to produce for them.

On Sunday night the first images of a brand new Coyotes jersey began to make their way online and although there was a video briefly published on the NHL's official website, it was eventually taken down for a reason that I must admit I haven't been able to uncover. However on Monday morning the Coyotes once again released that very same video, this time through their official social media channels, and in that video they unveil their brand new white jerseys.

The jersey is a throwback to the old school jerseys that fans will remember fondly from the days that the team was known as the Phoenix Coyotes, proudly sporting one of my favorite logos in the entire league. The Kachina style logo looks stunning on the new jerseys and in my opinion the white backdrop makes the beautiful logo stand out all that much more against the other colors on the jersey.

As you no doubt saw on the picture that served as the cover for this article, the Coyotes have also included a wonderful crescent moon shaped patch on the shoulder of the jersey as well, something that really rounds out the whole design quite nicely. Now to be fair I would say that this is something more of a teaser video than an official reveal, considering that we only get very quick flashes of the jersey as the video jumps from frame to frame showing a wide variety of images from both the past and the present.

The Coyotes have also picked a great model to show off their brand new jersey with franchise defenseman Jakob Chychrun being selected as the man to showcase the new threads, but much to their credit the Coyotes also pay tribute to former franchise greats like Shane Doan and Jeremy Roenick in the short video that they released.

You can see the brand new Coyotes jersey in the short clip that they have released today, just below.