NHL News : Corey Perry reveals the excuse officials gave him for the non-call in Game 3.

This doesn't pass the smell test. 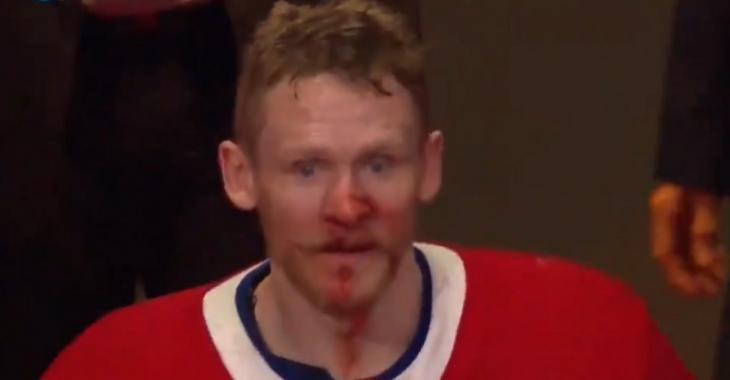 It has been two days since Game 3 was contested between the Las Vegas Golden Knights and the Montreal Canadiens in the Stanley Cup Semifinals but given that we learned today that there would be no change to the officiating crew despite their numerous errors in this series, fans and pundits are still talking about the terrible job the National Hockey League's officials have done in this series.

There have been a number of terrible calls and terrible non calls courtesy of referees Chris Lee and Dan O'Rourke in this series but since Game 3 the focus has largely been on the brutal non call that they allowed to happen in the overtime period of that game. I am of course referring to the nasty high stick that was delivered by Golden Knights forward Jonathan Marchessault, one that caught Canadiens veteran Corey Perry up high on the nose and left him a gorey mess, that should have resulted in a 4 minute power play for the Canadiens but that somehow went entirely unnoticed by all 4 on ice officials.

On Sunday Perry spoke to the media and he was asked about the incident and the Habs forward went on to reveal that what he had been told by the officials following the missed call. Now I don't want to impugn the integrity, or what is left of it, of the officials in the National Hockey League but the explanation Perry claims to have received does not pass the smell test. Perry claims that he was told by the officials that they thought it had been a follow through, a very odd explanation when you consider the fact that Marchessault never had the puck and therefore was definitely not following through on a shot attempt.

"It was a follow through, they didn’t know for sure, but we all know it was a high stick." said Perry of the explanation he was given by the officials.

Perry's quote seems to imply that he himself wasn't buying the explanation and I strongly suspect that fans who were disappointed by the officiating in Game 3 won't be buying it either. No doubt both Lee and O'Rourke will be under the microscope in tonight's Game 4.

Fiala and Wild millions apart on a new contract.

Messier sues cannabis company after they allegedly ripped him off for $500,000
Subscibe to
Our NEWSLETTER
Receive the best articles of the web directly in your email