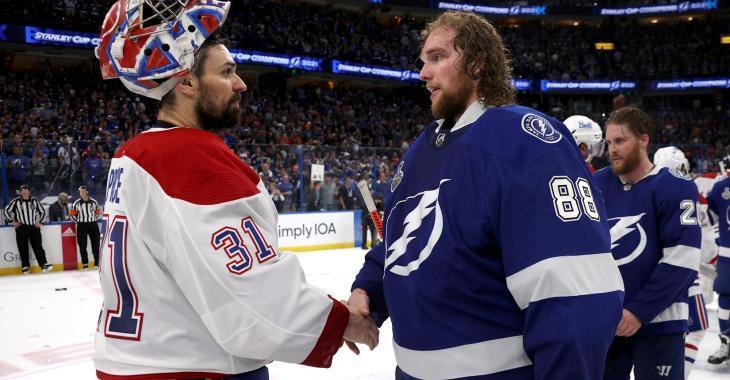 Tampa Bay Lightning goalie Andrei Vasilevskiy has been trending on social media ever since he won the Stanley Cup on Wednesday night, but now, the trend is getting negative.

A question was asked more than once and controversy emerged : did Vasilevskiy’s equipment comply with NHL rules during the Stanley Cup Final?

Several fans pointed out that the difference in size between Vasilevskiy and Habs star goalie Carey Price was way more than what we get to see on paper.

Price and Vasilevskiy are both 6’3 in height, however the Canadiens’ netminder is - supposedly - five pounds lighter than the Russian goaltender.

But on pictures shown of the two men shaking hands on Wednesday night, there is no way there is just a five-pound difference between the two. Which prompted folks to call out Vasilevskiy and wonder if his equipment was legit.

Sure, Vasilevskiy might weight more than what can be read on his NHL.com profile. We’ve seen players in the past adding an inch or two to his height.

But you have to admit the difference is quite noticeable here. Did he put on 50 pounds during the Cup run?

Not sure what this is all about, but some fans believe it means controversy. What do you make of this?

Kraken working to land two star players ahead of expansion draft!
Subscibe to
Our NEWSLETTER
Receive the best articles of the web directly in your email