NHL News : Controversial penalty gets called and things get worse as Isles score on ensuing power-play!

Pelech shoves Point, who goes right into Varlamov, but gets called for goalie interference… Was Bruce Cassidy right? 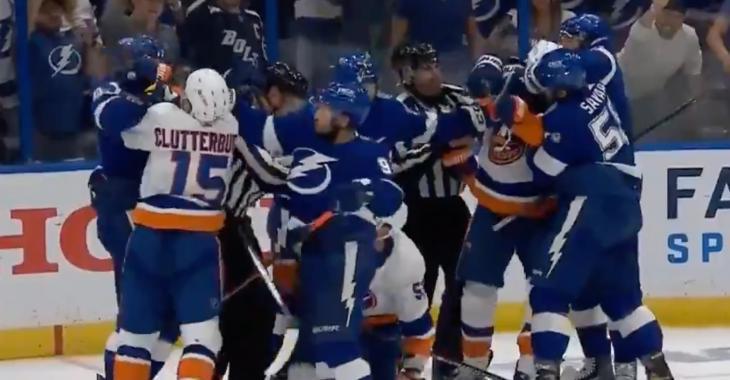 Boston Bruins head coach Bruce Cassidy might have had a point…

On Tuesday night, the Tampa Bay Lightning got the lead early thanks to a goal from Brayden Point, but it didn’t take long for the New York Islanders to tie things up with the help of the officials.

During a quick play, Adam Pelech shoved Point into his own netminder Semyon Varlamov, who was shaken up on the play. As the trainer came to see the goalie to make sure he was okay after the hard collision, referees stunned everyone by sending Point to the penalty box for a goalie interference minor.

In the meantime, Varlamov was pulled from the game and Ilya Sorokin came in cold. Varlamov did return for the second period.

The crowd was furious, but things got worse as the Islanders scored on the ensuing power-play. The fans in Tampa started chanting ‘Referees suck’ and players pushed and shoved as Pat Maroon and Matt Martin dropped the gloves and fought.

This is Brock Nelson's goal and the fight:

The Islanders have to know this was not a penalty and they got a huge hand from the officials. Right?

Will head coach Barry Trotz say anything about it?