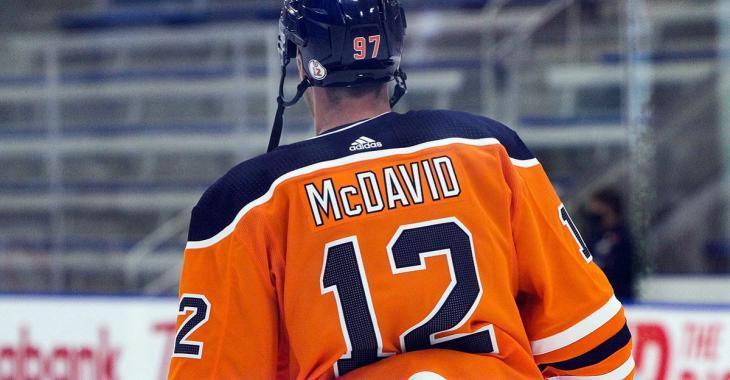 The National Hockey League may have made a major misstep and the one thing that is certain is their decision has rubbed the biggest star in the sport the wrong way.

Over the weekend the Edmonton Oilers players and staff joined with the members of the Cave family and with Emily Cave in order to hold a memorial in honor of the life of former Oiler Colby Cave. Colby of course tragically passed away exactly one year ago today after a cyst he developed on his brain turned fatal. It was a devastating moment for the hockey community but it was even more so for those closest to Colby, that being his parents, his wife and his teammates.

The memorial was planned well in advance of the regular season and the decision was made, I would argue wisely, to hold the memorial during a day on which the Oilers were not playing. That day was meant to be yesterday, the 10th of April 2021, which was just one day shy of the one year anniversary of his death. Unfortunately the pandemic has also caused massive delays to this ongoing regular season and as a result of those delays the NHL ended up rescheduling one of Edmonton's games on the same day as the memorial.

The decision to put the game on this day of all days becomes all the more unfortunate when you realize that the Oilers are now looking at 5 consecutive days off on their schedule. I'm sure there are reasons the league opted not to book the game on one of those days instead, but nonetheless it was enough to draw the ire of Edmonton Oilers captain Connor McDavid.

McDavid has very rarely criticized the league throughout his career but when it came to this matter over the weekend he did not hold back his displeasure, expressing his disgust with how the situation was handled.

"You’re asking a lot from guys, to sit through something like that, remember your teammate (Colby Cave), see what the whole family is going through, and be expected to perform that night. I’m not sure what the league was really thinking there," said the normally subdued McDavid.

"You would like the NHL to maybe think that one through a little bit," he added.

The Oilers did not perform on the night, losing in a blowout to the Flames by a score of 5 - 0, but when you consider the emotional toll that such an event likely took on every player in that locker room you can hardly blame them for being flat.