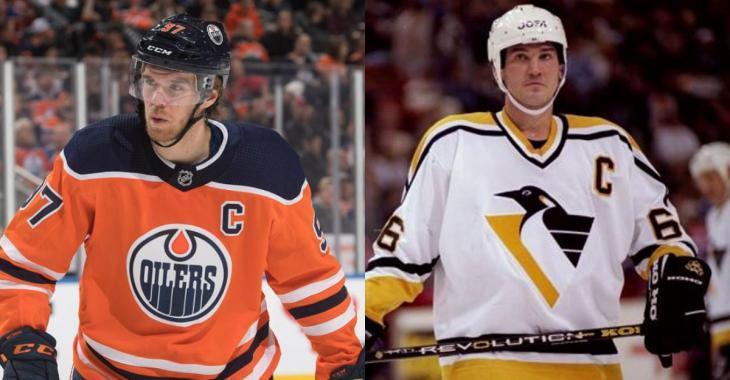 The legend of Edmonton Oilers captain Connor McDavid continues to grow day by day and on Saturday he added another incredible chapter to his story when he broke a record previously set by one of the greatest players to ever set foot onto the ice.

Although the Stanley Cup Playoffs are set to kick off this evening, due to the many delays caused by COVID-19 this season the Oilers were actually facing off against the Vancouver Canucks on Saturday in what was the Oilers final game of the regular season. Although the game was one the Oilers would probably rather forget as they head into the playoffs, they were defeated by a score of 4 - 1, for McDavid it marked an amazing accomplishment.

With the regular season wrapped up we now know that the Oilers will end the regular season with a tally of 183 goals and it is McDavid's level of participation on those goals that have earned him a place in the National Hockey League's history books. McDavid's 105 points on the season indicate that he participated in a staggering 57.38% of all Oilers goals, an absurd number. That number is good enough to claim sole possession of the NHL record, and only by the most slim of margins imaginable.

The record was previously held by a true legend of the sport, Mario Lemieux of the Pittsburgh Penguins. The superstar forward turned NHL owner had previously set the record during the 1988 - 89 regular season, and it really is amazing just how close McDavid came to missing out on this one. In that season Lemieux had an absurd 199 points over the course of just 76 games, a number that was good enough for participation of 57.35% of the Penguins total goals.

All that to say that McDavid has set a new NHL record by a margin of 0.03%, it doesn't get much closer than that.

I do have to add the caveat however that McDavid has achieved his record over a shortened NHL season and there is no doubt that many will be quick to point to both the defensive liabilities and the goaltending woes of the NHL's North Division this season. In spite of that, this remains a truly incredible accomplishment on the part of McDavid and when we consider the player he has surpassed here today he absolutely deserves to be celebrated for his amazing achievement.