Could he be the first member of the Kraken? 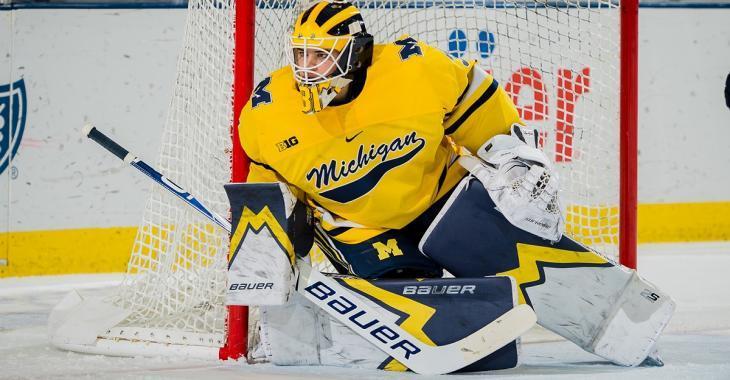 The Seattle Kraken have officially entered the National Hockey League and even though it has only been a few days there have already been plenty of rumblings about which players may end up on the Kraken's roster.

The latest on this front comes from Ryan Kennedy of The Hockey News who believes that a certain collegiate athlete could very well become the first player signed by the Kraken organization. Kennedy pointed to University of Michigan goaltender Strauss Mann as a potential candidate to become the first player put under contract in the organization's history, pointing to the curious timing of Mann's decision to leave school.

Having said that, University of Michigan goaltender Strauss Mann just announced that he would be leaving the Wolverines in order to pursue professional opportunities and while the timing may have been coincidental, it is pretty tempting to connect the dots.

I could certainly see why he would have landed on the Kraken's radar. For one he is not currently tied to any team in the National Hockey League which would mean he would be brought in purely as a free agent, which wouldn't cost the Kraken a pick in the expansion draft, and he's also performed really well in college.

It seems relatively unlikely that he would make a quick jump to the NHL given that he is a little undersized in the era of big goalies in the National Hockey League, but the thinking here is that he would provide some excellent depth for the Kraken as they embark on their journey into hockey. Keep in mind that the Golden Knights made a similar move ahead of their inaugural season in the NHL when they signed forward Reid Duke, a player that still to this day has never suited up in an NHL game for them.

If you're curious about who you might see in net for the Kraken at the NHL level, there were some rumblings about that over the weekend which we covered in an earlier story which you can read here.