We get why… will the Canadiens? 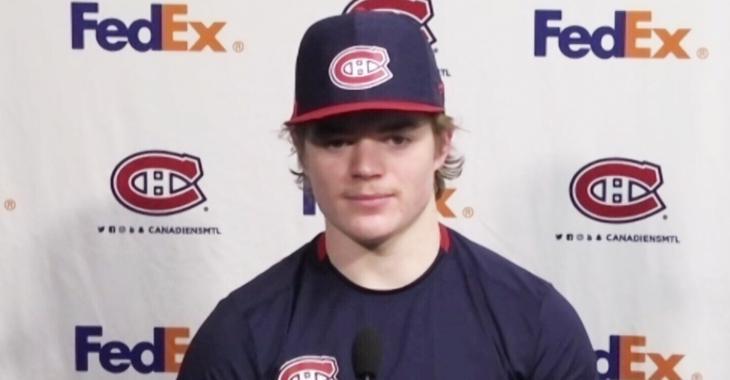 Montreal Canadiens top prospect Cole Caufield met with reporters following Friday’s morning ahead of tonight’s game against the Calgary Flames. Fans got excited that this could mean Caufield would be inserted in the Habs’ lineup though head coach Dominique Ducharme crushed their hopes by stating that Caufield was speaking because “you guys wanted to talk to him”.

The young forward probably knew fans and pundits would be disappointed with him sitting out again as the Canadiens desperately need fire power and so he decided to get everyone excited by showing off during practice.

Marc-Andre Perreault of TVA Sports caught Caufield makes insane moves on the ice with his new teammates and the kid started trending on social media.

Yes, with fans begging the Canadiens to get him in the lineup. See why:

For the moment, Caufield continues to practice on the team’s taxi squad, but did not sound bitter about it.

“I think I’m in a great spot here. Getting to practice and be around these guys and the coaching staff. They know what they’re talking about.,” Caufield said following Friday’s morning skate. “I’ve been pretty lucky to have this time and I’m just trying to make the most of it.

“If that opportunity comes, I’ll make the most of it. But the opportunity I have right now is pretty special too.”

The Habs are 5-7-0 in April and is averaging just 2.16 goals per game this month. The power play is also mired in a 3-for-33 slump as Montreal fights to maintain an eight-point lead on Calgary for the fourth and final all-Canadian North Division playoff spot.

We understand how badly fans want to see Caufield on the team.

Caufield scored 30 goals in 31 games this season at the University of Wisconsin and won the Hobey Baker Award, an honour given to the best player in the NCAA. And he is now trending more than ever!

ICYMI: Crosby can't hold back tears during emotional tribute.
Subscibe to
Our NEWSLETTER
Receive the best articles of the web directly in your email