Letting the expletives fly! Throws his own team under the bus! 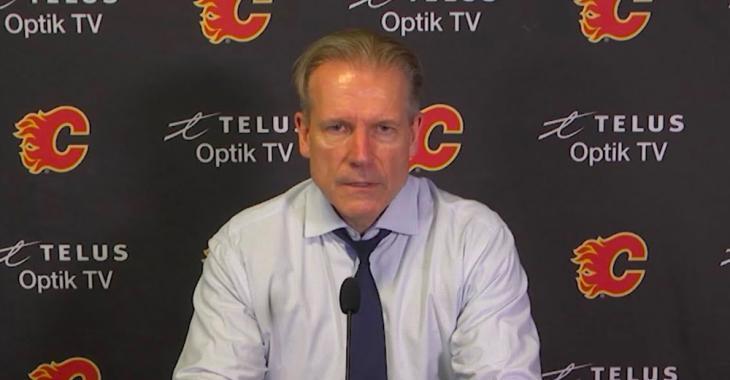 In case you missed it last night, the Vancouver Canucks absolutely dismantled the Calgary Flames beating them 5-1. The Canucks managed to chase Jacob Markstrom, their former goalie, and quite frankly if it weren't for Markstrom the Flames might have lost 10-1. It was a poor performance from a team that has really struggled with consistency this season and head coach Geoff Ward wasn't a very happy camper following the loss.

When asked what went wrong, Ward had a blunt response.

Check it out courtesy of Flames insider Jeff Francis of Sportsnet:

You hear that Sean Monahan? How about you Matthew Tkachuk?

The real concern in Calgary, I would say, is that the Flames are running a serious risk of driving Markstrom into the ground. He has started 14 of 17 games so far this season and last night he looked a lot like a goalie who is overworked and overtired. His reads on two plays in particular demonstrated just how tired he might be getting.

Markstrom decided to channel his inner Dominik Hasek on both Tanner Pearson and Bo Horvat, attempting to blindside both players while they were chasing down a puck. In Pearson's case it worked out for Markstrom, in Horvat's though... not so much.

I'm a big Markstrom fan, but these were just straight up bad decisions.

In a season where teams should be taking extra caution to make sure their goaltenders are rested and ready to compete every game, the Flames are just trotting Markstrom out in front of the firing squad every night. I suggest that Ward take a look at his own coaching strategies before throwing his team under the bus to the media.

Report: Nylander out of the lineup for awhile longer
Subscibe to
Our NEWSLETTER
Receive the best articles of the web directly in your email