Things are about to get very interesting! 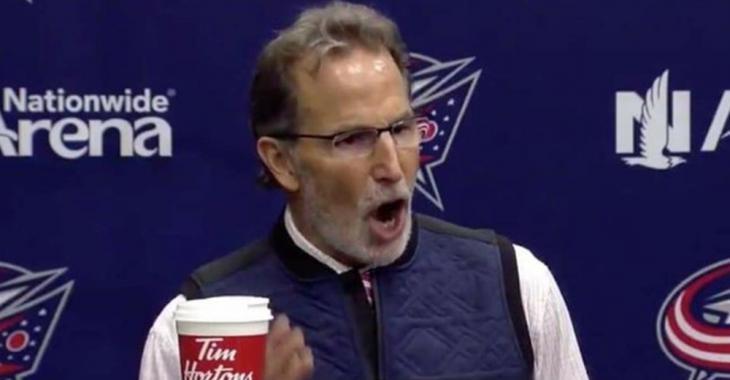 It's no secret that Columbus Blue Jackets forward Pierre-Luc Dubois wants out of town. In fact, the 22 year old burgeoning star said exactly that when addressing his teammates last week. Head coach John Tortorella told the media that he and his team would handle Dubois' trade request "in house" and that there would be no shying away from anyone's opinions on the matter. "We put everything out in the open," Tortorella stated last week.

That's all fine and well off the ice, but what about on the ice?

Prior to the third period of today's contest against the Detroit Red Wings, Dubois hasn't exactly looked like his usual self. He seems disengaged and, frankly, he looks exactly like a guy who doesn't want to be on his team. Because... well... he doesn't.

So if you don't want to play, you know what's going to happen? You're not going to play. Especially under a coach like Tortorella. To that end, Torts absolutely BURIED Dubois in today's game, giving him just one 36 second shift in the latter half of the second period during a close game.

He ends up coming out for the third period with a chip on his shoulder and low and behold he gets a big goal for his team.

The Blue Jackets would go on to win the game 3-2. Not a bad little bit of coaching from Torts.

Maybe I'm out to lunch here, but does anyone else see the parallels between Dubois and former Tampa Bay Lightning superstar Vincent Lecavalier? When Lecavalier was first breaking into the league, he requested a trade to get away from his then coach in Tortorella. Know what happened next? Lecavalier stayed with the team against his best wishes, cleaned up the defensive side of his game, put in a lot more effort and earned himself a Stanley Cup championship alongside Torts. Sound familiar?

Frankly, I'm not sure what the problem is from Dubois' standpoint. The guy was gifted a top line center position with Artemi Panarin as his winger at age 19. The Blue Jackets have made the playoffs every year he's been there and they've won a round in two out of his three seasons. He's just 22 years old and he wants out already? Buyer beware is all I'm saying.

Leafs coach Keefe takes a jab at GM Dubas!
Subscibe to
Our NEWSLETTER
Receive the best articles of the web directly in your email