Backs against the wall and Coach Tippett doubles down. 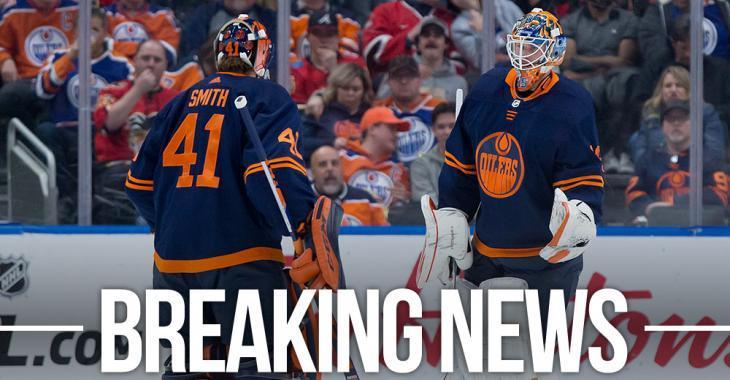 In case you missed it last night, the Edmonton Oilers... well... they blew it.

Down 2-0 in their opening round Stanley Cup Playoff series against the Winnipeg Jets and holding a 4-1 lead in the third period of Game 3, the Oilers absolutely collapsed. They surrendered three goals in just over three minutes and then ultimately lost the game in OT. Four. Unanswered. Goals.

The worst part for the Oilers is that Game 4 goes tonight. This team has to shake off the insane disappointment of last night's defeat in less than 24 hours and play with their backs against the wall in a do or die Game 4. So... who does coach Dave Tippett turn to in goal? The man who coughed up at least three bad goals yesterday evening, Mike Smith.

Look, last night wasn't entirely Smith's fault... but how can you come back with this guy again tonight? He surrendered four goals when it mattered most...

Maybe this says more about Koskinen and Tippett's lack of faith in him more than it says about Smith, but I find it absolutely crazy that Tippett wouldn't feel the need to shake things up with a goaltending change. For what it's worth, Koskinen has been sub-par this season from start to finish and frankly doesn't inspire much confidence from me other. But this is a team that just needs a shake up bad. When your 39 year old pending free agent goaltender allows four goals at the worst time possible, it's probably a good time for a shake up. But then again, Tippett has a wealth of experience with Smith in goal. The two, of course, were joined at the hip during their days with the Phoenix / Arizona Coyotes in the mid-200's into the 2010's. For better or worse it looks like Tippett is going with the devil that he knows in Smith, rather than the devil that he doesn't in Koskinen. It's a bold strategy, but at this point what do the Oilers have to lose?