There's nothing wrong with some healthy competition. 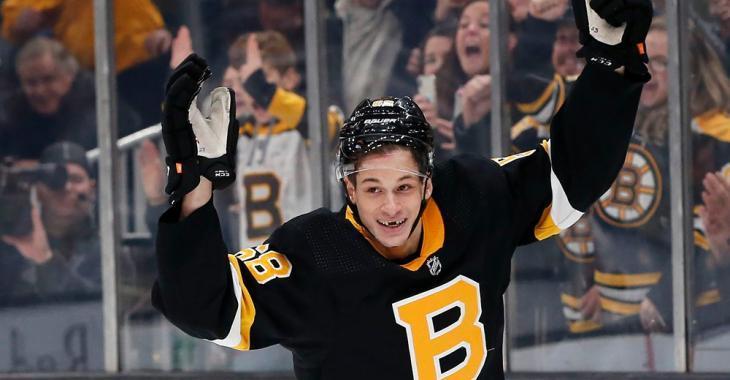 The Boston Bruins enter the upcoming season looking a bit different, as Bruins mainstays Tuukka Rask and David Krejci are both absent. In Krejci's absence, the Bruins will be relying on their depth to step up their games.

Jack Studnicka, Boston's 53rd overall draft selection from the 2017 NHL Draft, has gotten a shot to center the team's second line between Taylor Hall and Craig Smith in the absence of Charlie Coyle. And with two goals and two assists thus far in exhibition play, head coach Bruce Cassidy has noticed.

“I liked his game. I liked his commitment to playing a 200-foot game and how he managed pucks,” said Cassidy. “He did not turn over pucks like he has in the past trying plays that…I hate to be disrespectful, but I’d call them junior [hockey] plays sometimes when they come up. They get away with it there, but they’re not going to here because the guys are better defensively.

“So he’s sticking with a simpler approach to how he’s going to generate offense and he’ll end up making some high end plays because he can. I think it’s worked out better for him. He hasn’t been chasing back the other way. I think his defending has been excellent in terms of what we’ve asked. He’s got to keep working on his strength at faceoffs, but we’ve got to take a look after the last [exhibition game]. Do we push somebody to the wing or not? That will be a conversation. We like how we are in the middle of the ice, but if our lineup looks better because we think [Studnicka] is ready then we’ll do it. But are we giving Charlie Coyle then what he deserves? He’s a proven NHL player. He has to play some games here. He’s going to play [against the Capitals in the final preseason game], but after that he’s going to have to play some games before we start moving the pieces around.”

Coyle made his return to the lineup during last night's setback against the Washington Capitals, scoring a goal for good measure. And for him, there's nothing wrong with some healthy competition between him and Studnicka for the 2nd line center spot.

“That’s what you need. That’s what good teams have. Every day I think you should feel a little pressure whether it’s a young guy, or whether it’s an older guy trying to make a push. That’s what makes the guys that are ahead play better because if you don’t then they are coming up,” said Coyle. “That’s the mindset you have to have to bring it every day or somebody is going to take your spot."

OTD in 1997: Conn Smythe Trophy winner Mike Vernon traded to Sharks
Subscibe to
Our NEWSLETTER
Receive the best articles of the web directly in your email