NHL News : Chara explains why he reacted the way he did after scoring his first goal as a Capital

The veteran player recorded his first with the Capitals last night. 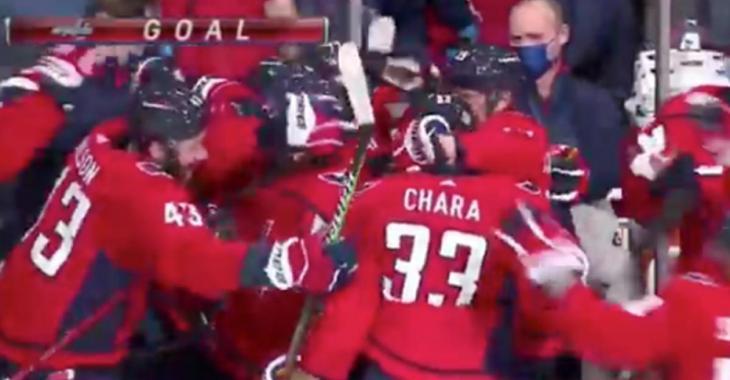 It was a special night for the Washington Capitals and defenseman Zdeno Chara especially on Thursday.

Not only did the Capitals came back to stun the New York Islanders with a 6-3 victory, Chara  scored for the first time with his new team to cap a five-goal second period.

The veteran player snapped the puck from the blue line and beat Semyon Varlamov clean, making it five unanswered goals in under 10 minutes as the Islanders had taken a 3-0 lead after 20 minutes.

The 43-year-old former Boston Bruins captain who close to his team’s bench when he scored and was mobbed by his teammates as the goal horn went on.

He explained after his team’s victory was it was so important for him to celebrate with all of his teammates like he did because of how welcomed they made him feel as soon as he got to Washington.

“Very excited to get the first goal as a member of Washington Capitals, but I returned to the bench to the guys right away because I just wanted to share that joy and excitement with them,” Chara said.

The goal was Chara’s 659th point of his career in his 1,561st game in the NHL. Earlier in the period, Chara got the primary assist on Conor Sheary’s second goal of the game.

He clearly feels at home with the Capitals and his teammates and we should expect more fire to come from Biz Zee.

NHL insider Chris Johnston jumps ship from Sportsnet to TSN!
Subscibe to
Our NEWSLETTER
Receive the best articles of the web directly in your email