The 22 year old gets the start for the B's again. 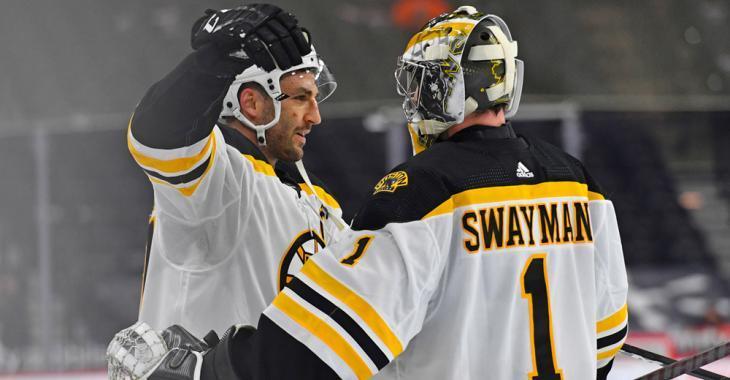 After an impressive 40 save appearance in his NHL debut, rookie Jeremy Swayman will get the start for the Boston Bruins again this evening, this time taking on Alex Ovechkin and the Washington Capitals.

Bruins head coach Bruce Cassidy confirmed that Swayman will get the start this evening. Fellow rookie Dan Vladar will back him up.

With veterans Tuukka Rask and Jaroslav Halak out of the lineup, it'll be up to the kids to hold down the fort for the Bruins. Rask remains sidelined with an upper body injury, while Halak remains in COVID-19 protocol.

The 22 year old Swayman was called up from the AHL's Providence Bruins on Monday after Halak tested positive and put on an absolute show in his first NHL game. The kid turned aside 40 shots and earned himself a tidy 4-2 victory over the Philadelphia Flyers.

"What an incredible experience," Swayman said after the game. "To get a win here in Philly, it means everything."

He's been even better in the AHL and his decision to turn pro this season looks to be a smart one. The Anchorage, Alaska native has 8 wins in 9 AHL starts and has posted a sparkling 1.89 GAA and .933 save percentage. Look out because this kid could be a real gem. Credit to the Bruins scouting staff for nabbing him in the 4th round of the 2017 NHL Entry Draft.