There's no question that Carey Price has earned his place amongst the best in franchise history. 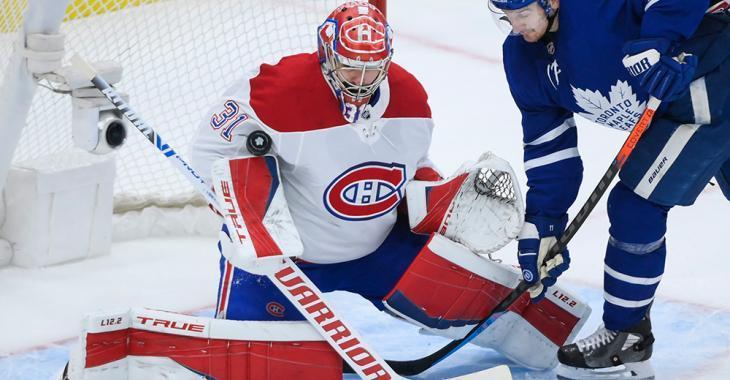 The Montreal Canadiens pulled off an improbably comeback in the Stanley Cup Playoffs last night, rebounding from a 3-1 series deficit against their historic rival Toronto Maple Leafs and ultimately prevailing in seven games.

The exclamation point came in the form of a 3-1 Game 7 victory on Toronto's home ice in front of a few-hundred fully-vaccinated health care workers, and the Canadiens got a timely performance from their most important player on the biggest stage of the year.

Goaltender Carey Price was superb against the Maple Leafs, shutting down their offensive attack led by the likes of Auston Matthews and Mitch Marner and posting a sparkling 1.83 goals-against average and .945 save percentage in the critical final three games.

Overall for the playoffs through seven games, Price sports a .932 save percentage and 2.24 goals-against average. Of course, being the humble athlete that he is, Price instead shifted the focus to his teammates.

"This is the best team game that we've played this season," Price said after Game 7.

Thanks to his efforts, Price is now tied in team history with the legendary Ken Dryden with three Game 7 victories.

Forward Brendan Gallagher, who scored the first goal of the game Monday night, couldn't come up with enough good things to say about his goaltender and said that once his team led, that was all Price needed to work with.

"I can't tell you what it's like playing in front of him," he said. "As soon as I saw the puck go in and we gave him one goal, it was almost like we knew it was going to be enough. It's just so easy playing in front of him because you know he's there to bail you out. Obviously, we had to keep playing, but it's a different level of confidence when you have Pricey back there, especially in these elimination games. He's the best I've ever seen. It's pretty nice to play in front of him."

"Carey was very solid. He was excellent," he said. "As a group, we showed a lot of resilience and character when we were down 3-1 in the series. We scored big goals at the right time. I think this was our best game. We deserved to win this game."