NHL News : Capitals refuse to respond to Rangers’ statement after Wilson causes the NHL to turn on itself

After the Rangers made the statement, the Caps have will let the NHL handle this… 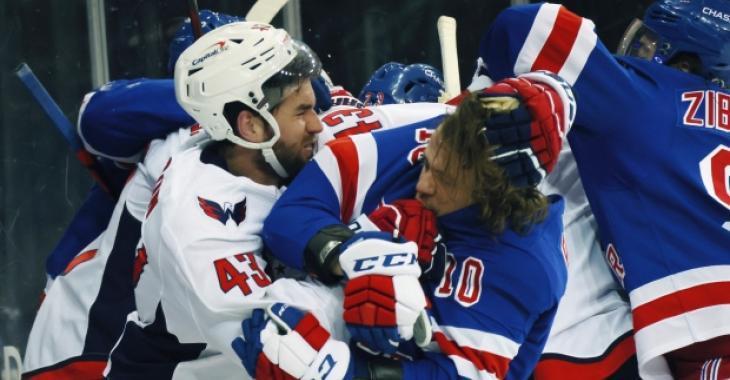 On Tuesday, the New York Rangers surprised everyone when they put out a statement on the NHL’s decision following Monday’s incidents in the game against the Washington Capitals. On Monday night, the chaotic scene that took place between the Capitals and Rangers was not as bad as what happened the next morning which resulted in Capitals’ forward Tom Wilson only getting a $5,000 fine for punching New York Rangers forward Pavel Buchnevich in the back of the head while he was facedown on the ice, while also throwing star Artemi Panarin to the ice in the ensuing scrum.

The Rangers demand that the NHL fire the head of the NHL’s Department of Player Safety George Parros, who failed to suspend indefinitely a repeat offender like Wilson.

It has now been confirmed that the Capitals will not respond to the statement and prefer to let the NHL handle this.

Fans were outraged with the NHL’s decision to only fine Wilson, who was suspended for seven games in March for a hit that injured Boston Bruins  defenseman Brandon Carlo. It was the fifth suspension of Wilson’s NHL career, the previous four coming in a 105-game span from 2017-18, which included a 20-game suspension for an illegal check to the head of Oskar Sundqvist of the St. Louis Blues back on Oct. 3, 2018, which was reduced to 14 games on an NHLPA appeal.

And while NHL commissioner Gary Bettman might not have wanted to get involved in this, it sure looks like he has no other choice now.