NHL News : Canucks on Hamonic: “It's bigger than what you think. We're working with him to get him the help he needs.” 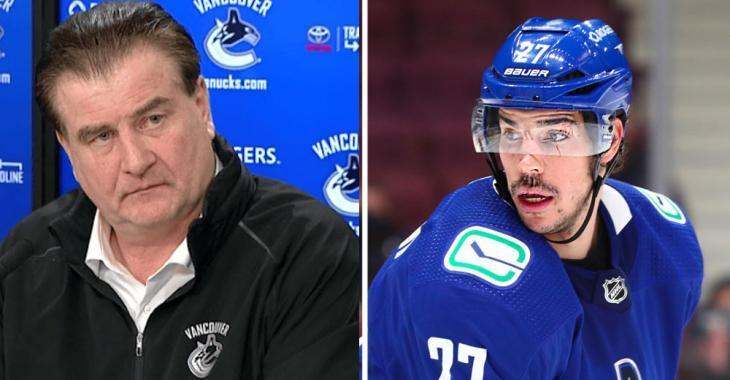 Earlier this offseason Vancouver Canucks insider Rick Dhaliwal reported that Canucks defenseman Travis Hamonic was seriously considering retirement at just 31 years old and the belief around the league is that his reasoning was due to the NHL's vaccine mandate.

"Things I heard over the weekend are Mr. Hamonic is thinking about retirement, sitting out this season, everything is on the table. Everything is family related."

While Hamonic is still technically on the team's roster, he has not participated in training camp and it's unknown what his status is heading into the season. In other words, we're speculating here mostly but Dhaliwal is a pretty well respected Canucks reporter and I think that his words likely carry a lot of meaning.

It's also worth noting that Hamonic opted out of the NHL's return in 2020 due to concerns over his daughter who has respiratory issues. Again, we can only speculate as to what this means but I'm certain that his family's health is at the forefront of his decision making.

"Everything I'm hearing... his mom's a nurse... I am not hearing that he is anti-vax. But this is a personal, family decision. He puts his family first, this guy is a really outstanding person that way so family first for him always."

Hamonic has not opted out of the season and, again, is still on the Canucks "non-playing" roster, but the team has stopped short of suspending him or sending him to the AHL's Abbotsford Canucks. He did pass through waivers and went unclaimed earlier this week.

“We’ve received confirmation that Travis Hamonic will not be opting out this season," Canucks general manager Jim Benning said in a statement at the time. "He remains at home, dealing with some personal matters. We continue to support him, and out of respect for the situation, we will have no further comment at this time.”

When pushed further, Benning doubled down on the fact that Hamonic is dealing with a private matter and that he won't be sharing the details with the media, no matter how much they push.

"When we say personal matters, it’s bigger that what you guys think it is. We’re working with him to get him the help he needs," Benning said to Sportsnet 650's Brendan Batchelor earlier today. Whatever the case is with Hamonic at home, here's hoping that he and his family are healthy and safe. Kudos to the Canucks organization for giving this guy the support that he needs right now.