Open up the building! We're being ROBBED of hockey's best atmosphere! 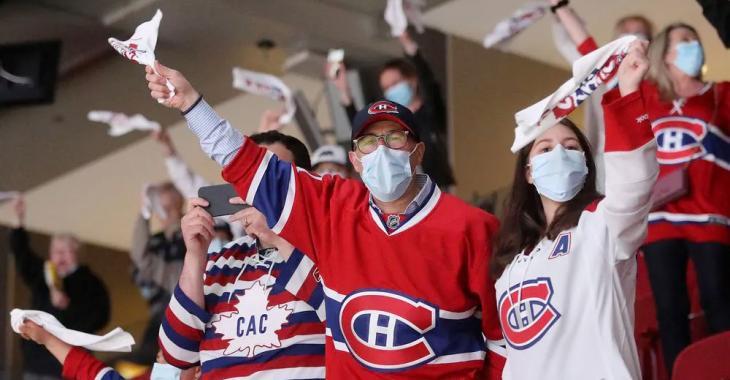 According to a second hand report from Montreal Canadiens insider Eric Engels of The Athletic, the team is petitioning local, provincial and federal authorities to increase capacity at the Bell Centre from 10% to 50% (10,500 individuals).

Currently there only 2,500 individuals allowed inside Bell Centre for Habs homes games. Meanwhile though, tens of thousands of fans have been gathering outside of the arena for each and every home and away game. To me, it seems silly to have 2,500 fans socially distanced in the arena but 10 times that amount outside with no masks on and no social distancing. Like... what are we doing here? I'm no infectious disease expert, but I know a mixed message when I see one. For what it's worth there have been exactly zero cases of COVID-19 resulting from an event at the Bell Centre since the team re-introduced fans for their first round series against the Toronto Maple Leafs. I'm sure that that's not the case for fans gathering outside the building, but it's also worth noting that Quebec seems to have gotten their COVID-19 cases numbers under control over the Spring/Summer months.

More than that though, frankly we're being robbed as hockey fans if we can't see a full house for Games 3 and 4 of the Stanley Cup Final. Imagine a packed Bell Centre with the Stanley Cup in the building and a chance for the Habs to claim their 25th championship in franchise history. That's about as good as it gets and it would create an absolutely ELECTRIC atmosphere in La Belle Province. Here's hoping that common sense can prevail and the Habs can at least get to 50% capacity for Games 3 and 4.

Veteran Dan Hamhuis formally announces his retirement from the NHL

25 players land on waivers Friday, including David Backes and Nic Petan
Subscibe to
Our NEWSLETTER
Receive the best articles of the web directly in your email