An ugly hit to the head. 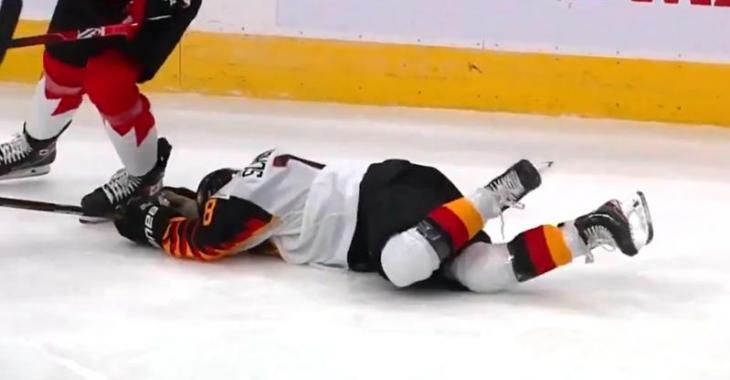 The Canadian squad at the International Ice Hockey Federation's World Junior Championship will be without one of their regular defenseman this evening when they face off against the Slovakian team in the tournament.

According to an official announcement from the IIHF, Canadian defenseman Braden Schneider has been issued a one game suspension for an illegal hit to the head of German forward Jan Luca Schumacher. There was little doubt in my mind that this hit would be reviewed given just how bad the optics were for Schneider, and furthermore it seemed pretty clear that he would get a suspension given the way these types of hits have been treated as of late in the sport of hockey. This is especially true considering that these young men are participating in an Under 18 tournament where these type of hits should be heavily discouraged.

Here's a look at the hit that led to the suspension:

Now I will defend Schneider a little here however as I do think he is not the only player in this scenario who could use this as a learning moment. Schumacher was reaching for what is often called a suicide pass in the sport of hockey and based on his body language it appears as though he saw the Canadian defender coming his way. Instead of bracing himself for the hit however he stopped short and reached for the puck, lowering his body and his head in the process, right into the path of the oncoming Schneider. Schneider himself could have made adjustments that would have avoided any impact to the head of the German forward and no doubt this is what led to the suspension from the IIHF, but I suspect that the mitigating factors I just mentioned may have also played a role in why this was merely a single game suspension for a pretty rough looking hit to the head.

This suspension could also serve as a benchmark for the suspension that will no doubt be forthcoming for Austrian Phillip Wimmer who had a much more blatant looking hit to the head of his own on Saturday, one that I suspect will lead to a multi-game suspension and perhaps his outright suspension from the tournament.