Tough break for a kid that looked like he was ready to really make an impact. 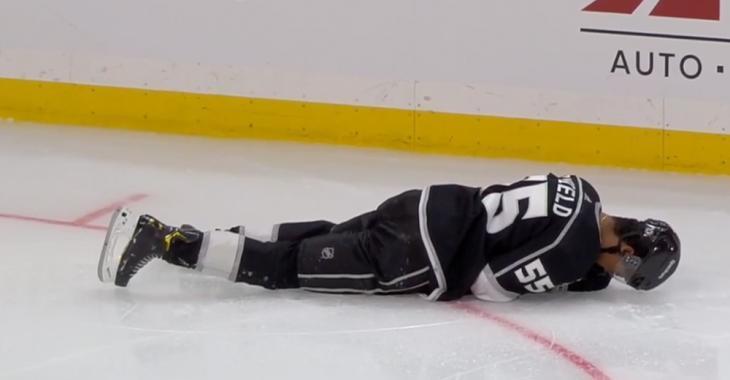 The Los Angeles Kings announced today that rookie forward Quinton Byfield will be out of the lineup week to week after suffering an apparent leg/foot injury from an awkward hit last night delivered by Arizona Coyotes forward Christian Fischer.

And here's the hit and resulting injury in question:

This is obviously a huge blow to the Kings, but it's an even bigger blow for the 19 year old Byfield. The 19 year old power forward was selected 2nd overall by the Kings in the 2020 offseason and, by all accounts, he had a stellar first year of pro hockey with the AHL's Ontario Reign. The 6 foot, 4 inch, 215 pound center put up a respectable eight goals and 20 points in 32 games and he did not look out of place in his six game NHL audition with the Kings either.

Coming in to this season Byfield had been seen as a legitimate candidate for the Calder Trophy as the NHL's top rookie. Depending on how much game action he misses though, that title may be out of his reach. Which is unfortunate really because this kid has all the tools at his disposal to be an absolutely dominant offensive player in the NHL. If you're looking for a direct comparison on his game, look no further than his very own captain in Anze Kopitar.

At six foot, 3 inches and 225 pounds and with a similar, puck protection, crash and bang style to his game Kopitar is a perfect comparison for Byfield. The fact that Byfield gets the benefit of learning the pro game alongside Kopitar should go a long way toward him fulfilling his potential. Some scouts say that Byfield himself has even more raw talent than Kopitar had at the same age, so you can just imagine how excited Kings fans are at the prospect of these two playing together.

As for what the Kings will do in Byfield's absence, they've called up four top prospects in Jaret Anderson-Dolan, Arthur Kaliyev, Rasmus Kupari and Alex Turcotte from the AHL in an effort to take his spot. It'll be up to one of these youngsters to step up and take advantage of the opportunity.